Although isolated IP joint injuries are common, they rarely occur simultaneously in a single finger. Even more rarely are they accompanied by a complete avulsion of the extensor mechanism. Operative restoration of the injured structures is a necessity in order to achieve a good functional outcome.

An initial forceful flexion of the finger resulting to rapture of the extensor apparatus and then followed by finger hyperextension and PIP joint dislocation is our perception of the possible mechanism of this extremely rare injury.

To answer these questions good knowledge of anatomy of the finger is essential.

A 35 year-old, left hand dominant, male, was admitted at the Accident and Emergency Department after being involved in a road traffic accident (RTA). At the time of admission the patient was intubated, with a Glasgow Coma Scale score of nine. Among other severe injuries clinical examination revealed a swollen ring finger with a Gustillo I open dislocation of the PIP joint and a stepladder deformity, with dorsal prominence of the base of the middle phalanx. There were no signs of vascular deficiency. X-Rays showed that the PIP joint was dislocated.

The patient was taken to the operating room where his most vital injuries were first addressed. His hand was then approached. After initial irrigation, the PIP joint was reduced closed without difficulty. Through a mid-dorsal incision further irrigation and debridement were performed and the following injuries were identified (Fig. 1a 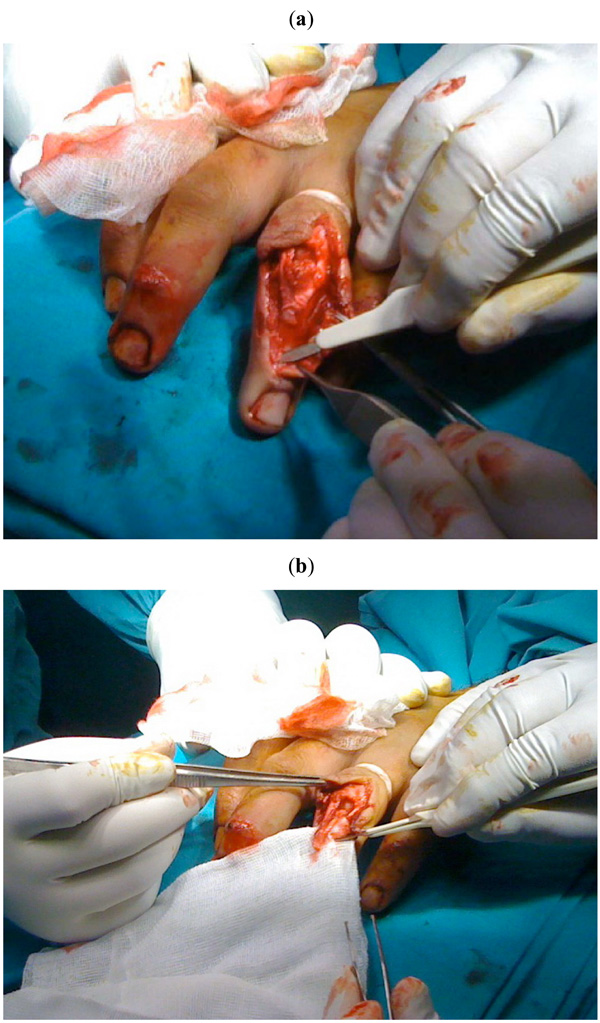 
The extensor mechanism was restored with interosseous suturing at the distal phalanx and repositioning of the central band in the middle phalanx by the use of a mini bone anchor (Fig. 2 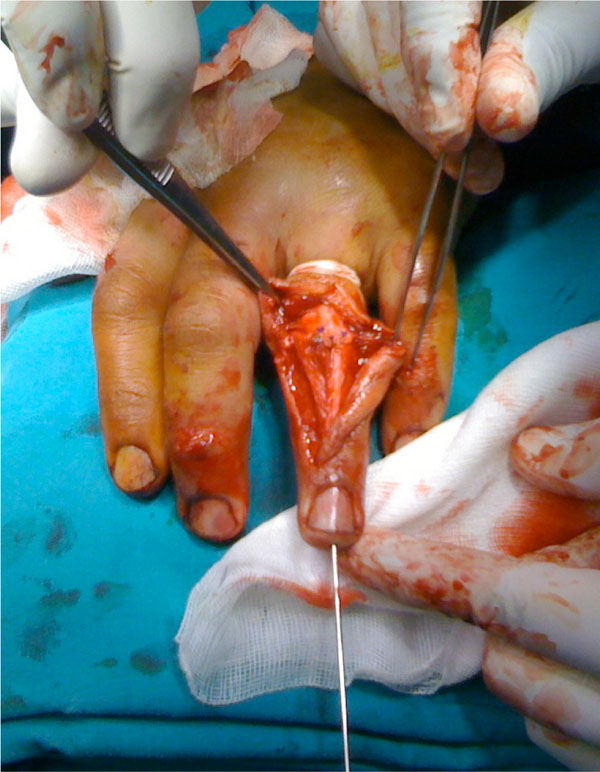 
Finally the PIP joint was stabilized in slight flexion with a mini external fixator and the distal interphalangeal (DIP) joint was transfixed in extension with a percutaneous Kirschner wire (Fig. 3 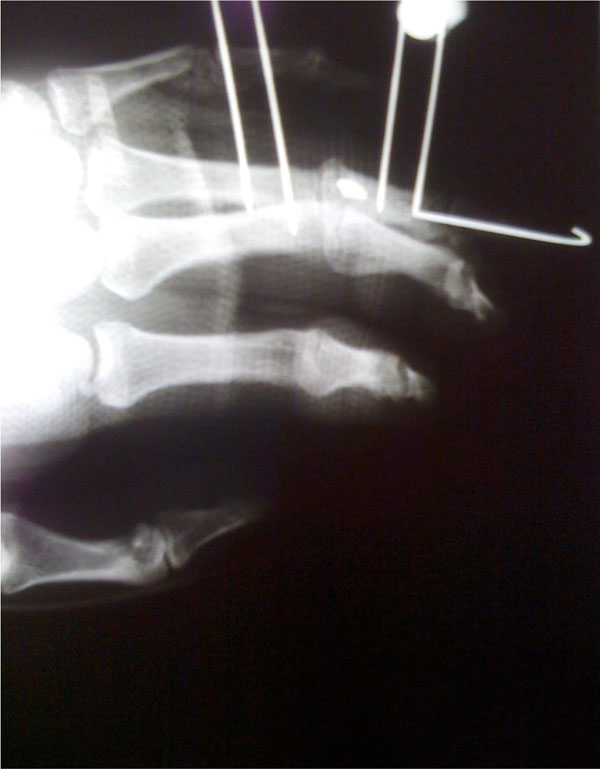 Post-operatively a volar splint, in the intrinsic plus position, was applied for three weeks. The external fixator was removed four weeks later and the patient was allowed to start exercising under supervision of a physiotherapist. The K-wire was removed six weeks post-operatively. Two months after the injury the PIP joint was stable with a range of motion between -5o extension and 70o flexion. The DIP joint remained stable but stiff with minimal ability of flexion (0-5o).

A review of the literature showed few similar cases, mainly describing dislocations occurring simultaneously in both interphalangeal joints of one finger. Such double injuries, though not common, have been reported since 1932 [1Schorcher F van. Ausrenkung zweier Glieder an dem selben finger Chirurg 1932; 4: 150-.]. The majority of these injuries are caused either by occupational or sport accidents and are not associated with complete rapture of the extensor mechanism. Hage et al. [2Hage J, Reinders JFM, Schuwirth L. Simultaneous dislocation of both interphalangeal joints in a finger Arch Orthop Trauma Surg 1990; 109: 179-80.] reporting on a simultaneous dislocation of PIP and DIP joints in the same finger, advise for careful checking of the collateral ligaments, extensor tendon and volar plate but do not clearly report rapture of the extensor mechanism. Although the cause may be different, agreement exists upon the mechanism of this double dislocation: A force striking the palmar surface of the terminal phalanx initially dislocates the DIP joint dorsally. The force continues to move proximally and then strikes the now prominent head of the middle phalanx, directing its base dorsally over the head of the proximal phalanx [3Tabib W, Sayegh S, Frick M, et al. Simultaneous traumatic dislocations of the index finger: apropos of a case with review of the literature Rev Chir Orhop Reparatrice Appar Mot 1998; 84: 75-8., 4Watson FM Jr. Simultaneous interphalangeal dislocation in one finger J Trauma 1983; 23: 65.].

Regarding the mechanism of simultaneous avulsion of the central band and the distal insertion of the extensor mechanism Sarrafian et al. [5Sarrafian SK, Kazarian LK, Topouzian LK, et al. Strain variation in the components of the extensor apparatus of the finger during flexion and extension J Bone Joint Surg 1970; 52A: 980-0.] have described that the peak strain on the terminal tendon is during the initial phase of flexion and the peak strain on the central slip occurs just before full flexion. These experimental results suggest that avulsion of the terminal tendon occurs initially, followed by avulsion of the central slip.

We found only one case in the literature reporting complete avulsion of the extensor apparatus of a finger [6Watanabe K, Urasaki T, Nishikimi J. Complete avulsion of the extensor apparatus of the little finger J Hand Surg 1997; 22B: 281-.]. Interestingly, the mechanism in this case was forceful and excessive flexion of both the IP joints. This differs with the mechanism of dislocation of the IP joints as already described.

In our case, it is difficult to explain the mechanism leading to both complete avulsion of the extensor apparatus and PIP joint dislocation, since each one of them appears to be opposite to the other. What we believe is that the patient initially sustained a forceful flexion of the finger that resulted to complete avulsion of the extensor apparatus. Continuously the finger was hyperextended and the PIP joint was dislocated.

Presence of a complete extensor apparatus avulsion and gross IP joint instability dictate operative restoration of the injured finger. Repositioning of the central band in the middle phalanx with a bone anchor was in our patient case an efficient and feasible method to use. PIP joint stabilization with an external fixator is a quick and reliable method in case of open injuries. If available, a dynamic fixator can be used, offering joint stability and early mobilization. In this kind of injuries, once the PIP joint is properly reduced and stabilized we do not consider the repair of one collateral ligament or the volar plate to be of crucial importance, because finger stiffness is to be anticipated even after adequate treatment and rehabilitation. Proper rehabilitation requires intensive physiotherapy under constant supervision. Complete return to previous activities cannot be guaranteed, this depending on whether residual finger stiffness is compatible with the patient’s working and other needs.