Secondary patella resurfacing is a controversial procedure which is applied in patients with anterior knee pain after a bicondylar knee arthroplasty (with unresurfaced patella). A group of 46 patients were submitted to this procedure and their satisfaction, range of motion and pain improvement was evaluated. 52.2% of the patients were satisfied with the procedure, with an improvement in pain (Visual Analogue Scale) of 65% and an improvement in range of motion in 56,5%, with roundabout half of the patients having no resolution to their complaints. Whilst an improvement was not achieved in all patients, as it was initially hypothesised, this procedure should be considered when a revision knee arthroplasty is performed with an unresurfaced patella.

An eventual screening tool could be the use of bone scans, with 95% of patients with anterior knee pain showing significant increased uptake (“hot patella”). The finding of a “hot patella” suggests that the problem is related to the patellofemoral joint [13 Ahmad R, Kumar GS, Katar K, et al. Significance of a "hot patella" in total knee replacement without primary patellar resurfacing Knee 2009; 16(5 ): 337-40.]. Albeit, according to a recent study, there seems to be no relation between “hot patella” and subsequent improvement after secondary patella resurfacing [14 Munoz-Mahamud E, Popescu D, Nunez E, et al. Secondary patellar resurfacing in the treatment of patellofemoral pain after total knee arthroplasty Knee Surg Sports Traumatol Arthrosc 2011; 19(9 ): 1467-72., 15 Porteous A. The patella in primary and revision total knee arthroplasty Orthop Trauma 2012; 26(2 ): 86-90.].

The aim of this study was to evaluate a group of patients, with bicondylar knee replacements, who were later submitted to secondary patella resurfacing, with the hypothesis that the procedure would be the resolution to their persistent anterior knee pain.

During the period of November 2005 to October 2007, 48 patients with bicondylar knee replacements were submitted to secondary patella resurfacing. The follow-up ranged from 14 to 38 months, with 2 patients lost to follow-up.

The main indication for the procedure was persistent anterior pain knee (36 patients), with a secondary indication being range of motion restrictions due to arthrofibrosis (13 patients).

In total there were 18 male patients and 28 female patients, grouped according to their initial implant (bicondylar implants; rotating hinge implants; hinged implants) and further into 2 groups (patients with anterior knee pain and with arthrofibrosis).

The patients were telephonically interviewed, and enquired as to their:

All variables were expressed in terms of mean ± standard deviation (SD) of the mean. A Student’s t test was performed when the data had a normally Gaussian distribution; otherwise the Mann-Whitney test was employed. The Shapiro-Wilk normality test was performed to ascertain whether the data were normally distributed. For all tests, p < 0.05 was considered statistically significant. Statistical analysis was carried out by means of a statistical software package (GraphPad Prism Version 4.1, GraphPad Software Inc., La Jolla, CA).

The mean age was 65 years (45y-81y). The mean time since the last procedure of the affected knee was between 12 months in the bicondylar implants and 18 months in the rotating hinge implants, with previous surgeries averaging 1.56 and 2.33 for the former and latter respectively (Figs. 1

Overall, 52.2% of the patients were satisfied with the secondary procedure (Fig. 3 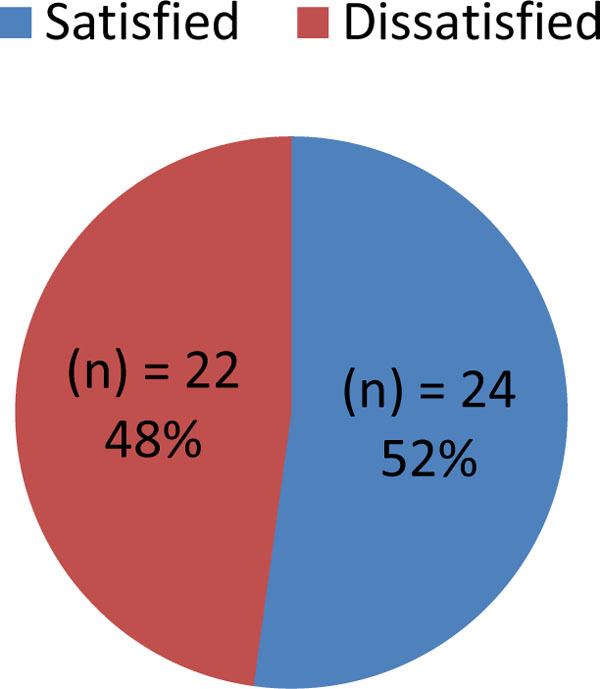 ). When stratifying to specific implants and indications, the results were as shown (Table1).


When correlating for age, half of the patients below the age of 70 benefitted from the procedure, while those above this age revealed no improvements.

The postoperative range of motion was improved in 26 cases (Fig. 4

) with no statistical significance, with varying results according to initial indications (Table1).

) in both the anterior knee pain and arthrofibrosis groups, with a decrease in postoperative painkiller use in 12 cases (6 increased, 28 unchanged).

During the secondary resurfacing, patients were submitted to soft-tissue procedures (Table 2).

Four patients were submitted to further procedures during the study period, as the secondary resurfacing had led to no improvement in symptoms (2 revision arthroplasties; 1 passive knee mobilization under anesthesia; 1 arthroscopic arthrolysis).

There were 2 surgery-related complications: a wound healing complication, with the need for debridement on 3 separate occasions (due to early removal of sutures) and a periprosthetic fracture of the patella, after a fall.

Over half of the patients submitted to secondary resurfacing of the patella benefitted from the procedure, with 65.2% revealing an improvement in pain symptoms. Although our hypothesis was rejected, this procedure may be an adjuvant solution to anterior knee pain and should be considered in the preoperative planning of revision surgery.

When considering subgroups, the under-70 year old patients with anterior knee pain after bicondylar knee replacement responded well to this form of treatment. Postoperative improvement in range of motion (60%) and improvement in pain (80%) led to patient satisfaction of 75% in this subgroup, providing a justified indication for this procedure.

Similarly, this indication may be applied to patients with arthrofibrosis, as a 53,8% improvement in range of motion and 62% improvement in pain symptoms was achieved in these patients. When reviewing current literature, a number of other procedures are mentioned, such as manipulation under anesthesia and aggressive physiotherapy, arthroscopic and open arthrolysis and revision arthroplasty [17 Maloney WJ. The stiff total knee arthroplasty: evaluation and management J Arthroplasty 2002; 17(4 Suppl 1 ): 71-3., 18 Scuderi GR. The stiff total knee arthroplasty: causality and solution J Arthroplasty 2005; 20(4 Suppl 2 ): 23-6.], with no apparent mention of secondary patella resurfacing.

In this study, secondary resurfacing of the patella revealed a low complication rate (2.2%) and a low rate of further procedures (10.9%).

Whether these patients improved from the secondary resurfacing itself, or from the associated soft-tissue procedures or both, remains to be seen, with further studies necessary to differentiate between the various techniques.

A sine qua non condition for the success of a secondary resurfacing is an accurate and well-fixed primary prosthesis, with correct ligament balance.

Although secondary resurfacing did not resolve the anterior knee pain in all patients, it is definitely an important procedure to keep in mind when revising a bicondylar arthroplasty. Further studies need to be done in order to provide improved screening for the origin of anterior knee pain and to evaluate the soft-tissue procedures in these cases.

No benefits in any form have been received or will be received from a commercial party related directly or indirectly to the subject of this article. No funds were received in support of this study.