The role of elevated homocysteine in primary and secondary Raynaud phenomenon (RP) and in patients with atherosclerosis has been reported controversially. In secondary RP due to connective tissue disease specific alterations of nailfold capillaries might be present. An association between these microvascular changes and homocysteine has been suggested.

The aim of this study was to determine whether homocysteine level differs between patients with primary and secondary RP and to test the hypothesis that homocysteine or other cardiovascular risk factors are associated with specific features of microangiopathy in secondary RP.

Eighty-one consecutive patients with RP referred for vascular assessment were studied by nailfold capillaroscopy. Homocysteine, C-reactive protein and cholesterol were measured and other cardiovascular risk factors and comorbidities assessed.

Homocysteine, C-reactive-protein and cholesterol levels did not differ between patients with primary (n=60) and secondary RP (n=21). Likewise, no differences in the prevalence of cardiovascular risk factors and comorbidities were found. In secondary RP no correlation was found between microvascular involvement and homocysteine or C-reactive protein.

The study was conducted from 2002 to 2005 at a tertiary referral centre as a prospective, non-randomised, single-centre study. Plasma levels of cholesterol, homocysteine, C-reactive protein, cardiovascular risk factors and comorbidities as well as patterns of nailfold capillaroscopy (NC) were assessed in patients with primary and secondary RP. To distinguish between primary and secondary RP we used the clinical criteria according to the American College of Rheumatology. Exclusion criteria were any history of liver diseases, cancer, or drugs that could interfere with Hcy. The patients underwent physical examination, nailfold capillaroscopy of all fingers and serological testing as part of the assessment for RP.

Hospital-based electronic charts were consulted to check follow-up to determine differentiation between primary and secondary RP in initially unclassified cases.

The local ethical committee had approved the study and all patients gave written informed consent.

Arterial hypertension was defined as systolic blood pressure >140mmHg, and diastolic blood pressure >90mmHg measured in triplicate and after a resting period of 20 minutes; diabetes as fasting blood sugar >7mmol/l; hypercholesterolemia as fasting total serum cholesterol >5mmol/l; smoking was defined as current smoker or smoking cessation in the last ten years with at least ten pack years of smoking.

The nailfold of all ten fingers were examined. To improve the image resolution, a drop of immersion oil had been deposited on the nailfold bed. The following parameters of the nailfold capillaries were evaluated from the videotape:

Continuous variables were presented as means and standard deviation or median with interquartile ranges as appropriate due to skewed distribution. Categorical variables were expressed as percentages. Qualitative data were compared by the Fischer’s exact test. Quantitative data were compared using Student’s t test and Mann-Whitney U test, the Kruskal-Wallis test with Bonferroni Dunn corrections. The statistical software package Stat View 5.0 was used to analyse the data. All p values are two-sided. Differences were considered statistically significant if p<0.05.

Clinical characteristics of the 81 patients (77% females) are shown in Table 1. Primary RP was diagnosed in 60 (74%) patients and 21 (26%) had a secondary RP. Another ten patients with secondary RP were excluded from the analysis due to different underlying diseases (two patients had a traumatic finger artery occlusion, two patients an embolic occlusion of a digital artery, two patients had been diagnosed with thrombangitis obliterans and four were unclassified). In female patients the prevalence of secondary (86%) and primary (73%) RP was not different. Although the patients with secondary RP tended to be older than the patients with primary RP this difference was not significant. Likewise, there were no significant differences for the presence of cardiovascular risk factors and co-morbidities between the two groups. There was no difference in Hcy and CRP between the two groups (Fig. 1 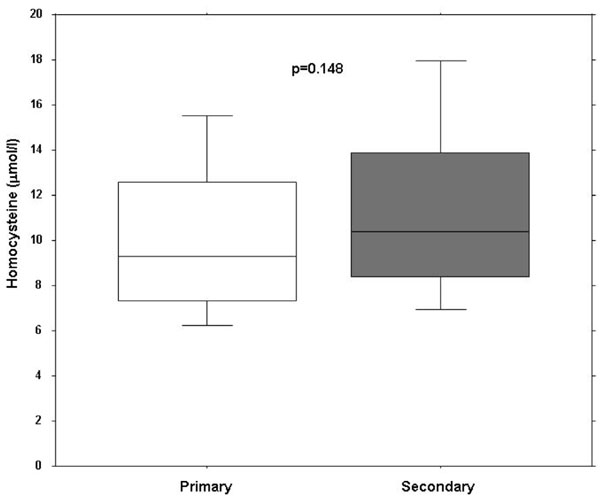 ). Table 2 shows the disease characteristics of the group with secondary RP with a 50% prevalence of unclassifiable secondary RP, followed by CREST (29%) and systemic sclerosis (19%).

Clinical Characteristics of Patients with Primary and Secondary RP

Nailfold Capillaroscopy in Patients with Primary and Secondary RP

As expected, in patients with primary RP only minor changes, mainly capillary tortuosity, of nailfold capillaries have been found. In contrast, there were major structural changes in patients with secondary RP. In 29% of patients giant capillaries, in 60% irregular architecture and in 38% haemorrhages were described (Table 3). This microvascular alterations translated into the definition of Cutolo et al. was as follows: Patients with primary RP (n=60) did not show signs of structural microangiopathy and were hence classified with “no microangiopathy”. From the 21 patients with secondary RP had 43% “early”, 19% “none”, 10% “active”, and 28% “late” pattern.

There were no significant differences in Hcy levels in relation to microvascular patterns (Fig. 2 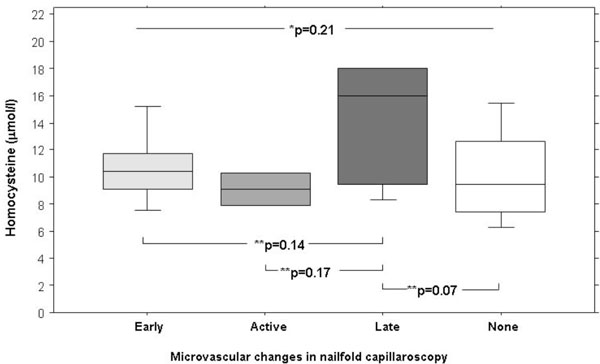 The multiple pathways in which Hcy affects vascular integrity and endothelial functional properties suggest a possible role of Hcy in RP and atherosclerosis..

In our patient group microvascular changes and Hcy levels in secondary RP did not correlate as previously reported. Caramaschi et al. reported higher values of Hcy in patients with systemic sclerosis (11.8μmol/l) than in healthy controls. They found that the level of Hcy correlated to the severity of microangiopathy in nailfold capillaroscopy [19Caramaschi P, Volpe A, Canestrini S, et al. Correlation between homocysteine plasma levels and nailfold videocapillaroscopic patterns in systemic sclerosis Clin Rheumatol 2007; 26: 902-7.]. In our study population the number of patients with systemic sclerosis was rather low, whereas Caramaschi included only patients with systemic sclerosis. Again, the value of Hcy in the study of Caramaschi was similar to the value we had in our patient group (11.8 versus 11.5μmol/l) with secondary RP. Other published data on Hcy in secondary RP are in the same range (10.6 to 13.1μmol/l) [13Cheng TT, Chiu CK. Elevated homocysteine levels in patients with raynaud's phenomenon secondary to systemic lupus erythematosus Clin Rheumatol 2002; 21: 251-4., 15Levy Y, George J, Langevitz P, et al. Elevated homocysteine levels in patients with raynaud's syndrome J Rheumatol 1999; 26: 2383-5., 16Marasini B, Casari S, Bestetti A, et al. Homocysteine concentration in primary and systemic sclerosis associated raynaud's phenomenon J Rheumatol 2000; 27: 2621-3., 22Czupryniak A, Kaluzynska A, Nowicki M, Wiecek B, Bald E, Owczarek D. Raynaud's phenomenon and endothelial dysfunction in end-stage renal disease patients treated with hemodialysis Kidney Blood Press Res 2005; 28: 27-31.]. In the general population up to 10% have Hcy values of more than 10μmol/l. The controversial results of the rather small studies comparing Hcy in patients with RP and healthy controls depend mostly on the differences in the control group which range from 5.9 to 10.7μmol/l. Cheng et al. compared Hcy levels in patients with SLE either with or without RP [13Cheng TT, Chiu CK. Elevated homocysteine levels in patients with raynaud's phenomenon secondary to systemic lupus erythematosus Clin Rheumatol 2002; 21: 251-4.]. He found higher Hcy levels in SLE patients with RP (11.7μmol/l) but not in those without RP (8.3μmol/l) compared to controls (8.0μmol/l). It might be that in autoimmune diseases the elevation of Hcy represents an additional risk factor for developing vascular damage. Data proving this assumption are very scarce. We hypothesised that in patients with elevated plasma Hcy and RP inflammation or cardiovascular risk factors might promote microvascular alterations. In our study there were no differences of CRP or cholesterol levels between primary and secondary RP. Furthermore, pathological features of nailfold capillaries did not correlate with CRP or any cardiovascular risk factors. Despite some short comings of this study as small simple size, cross section data with only one time measurement and potential sample bias, it still adds to the scarce data available on this topic and rather supports that Hcy level are probably not of major relevance in Raynaud phenomenon.

In conclusion, we did not find any difference in Hcy levels in patients with primary or secondary RP. Neither Hcy nor cardiovascular risk factors nor comorbidities were associated with microvascular changes.

Prospective studies would be needed to further investigate whether Hcy is involved in the progression of micro- and macrovascular complications in different systemic diseases.

There is no conflict of interest by any of the investigators performing the study.