Bone morphogenetic proteins (BMPs) are important elements in bone biology. We herein report the expression profiles of zebrafish bmp3 (zbmp3) as demonstrated by real-time PCR and in situ hybridization. The expression of zbmp3 was highly detectable by real-time PCR from 1 day post-fertilization (1 dpf) to 2 weeks post-fertilization (2 wpf) and peaked at 1 wpf. For in situ hybridization experiments, zbmp3 was expressed in the otic vesicle at 1 dpf, 2 dpf, 3 dpf, and 5 dpf. It was also expressed in the pharyngeal arches, including the opercle, branchiostegal ray, and pectoral fins, at 2 dpf. Our results suggest that zbmp3 may play an important role in the skeletal biology of developing zebrafish.

Bone morphogenetic proteins (BMPs) are members of the transforming growth factor-beta (TGF-beta) superfamily. Although most BMPs are positive regulators of bone biology, BMP3 is an antagonist of osteogenic BMPs [1Daluiski A, Engstrand T, Bahamonde ME , et al. Bone morphogenetic protein-3 is a negative regulator of bone density. Nat Genet 2001; 27: 84-8.]. The BMP3 gene is highly conserved across species, suggesting that it is evolutionarily important for development in mammals [2Lowery JW, Lavigne AW, Kokabu S , et al. Comparative genomics identifies the mouse Bmp3 promoter and an upstream evolutionary conserved region (ECR) in mammals. PLoS One 2013; 8: 0.]. A previous study uncovered that murine Bmp3 was expressed in the cartilaginous cells of otic capsule sections using in situ hybridization [3Stankovic KM, Adachi O, Tsuji K , et al. Differences in gene expression between the otic capsule and other bones. Hear Res 2010; 265: 83-9.]. However, as there have been few reports on the temporal and spatial expression profiles of Bmp3 in whole animals, we examined the expression patterns of bmp3 in developing vertebrates using a zebrafish model system.

In situ hybridization was performed as earlier described [5Nakamura Y, Weidinger G, Liang JO , et al. The CCN family member Wisp3, mutant in progressive pseudorheumatoid dysplasia, modulates BMP and Wnt signaling. J Clin Invest 2007; 117: 3075-86.] on 1, 2, 3, and 5 dpf embryos and larvae using full-length zbmp3. Digoxigenin-labeled RNA probes were generated using an Sp6 labeling kit (Roche, USA) according to the manufacturer’s instructions. Signals were detected with an ALP-conjugated anti-digoxigenin antibody (Roche) and visualized using 4-nitro blue tetrazolium and 5-bromo-4-chloro-3-indolyl-phosphate. The reaction was stopped by replacing the substrate with several rinses of PBT (PBS plus 0.1% Tween 20). Embryos were stored in the dark at 4°C in PBS containing 0.02% sodium azide until they were photographed. 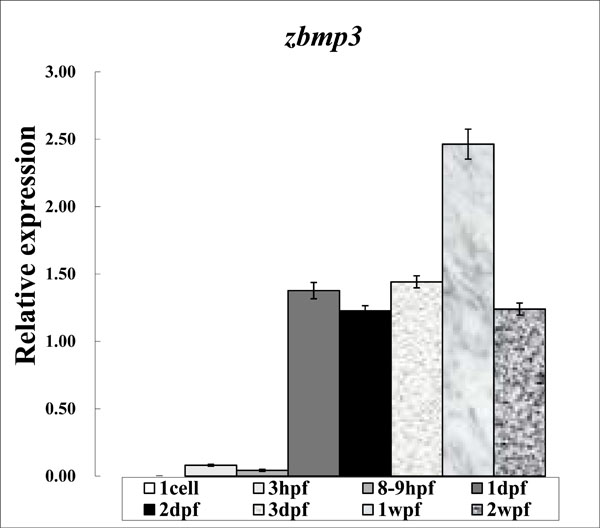 ), the real-time PCR expression level of zbmp3 was very low at 1 cell, 3 hpf, and 8-9 hpf time points. However, zbmp3 expression was dramatically increased from 1 dpf to 2 wpf and peaked at 1wpf.


For in situ hybridization experiments, zbmp3 was not detectable before 1 dpf, but was specifically expressed in the otic vesicle at 1 dpf (Fig. 2a

; white arrowhead) at 2 dpf. Each experiment was repeated at least twice. A sense (forward) probe of zbmp3 was used as a control, for which no specific signal was detected.

We observed increased and localized expression of zbmp3 at specific time points in the present zebrafish development model study. Our results suggest that bmp3 may be a key player in skeletogenesis in vertebrates.

Schoenebeck et al. have reported that zbmp3 was expressed in the pharyngeal arches and pectoral fins of zebrafish at 48-72 hpf. However, zbmp3 expression in the otic vesicle was not remarkable in their study as it was in ours (Fig. 2a

Runx2 is a transcriptional factor required for osteoblastic differentiation and the development of hypertrophic chondrocytes. In zebrafish, there are 2 orthologs of Runx2, runx2a and runx2b [8Flores MV, Tsang VW, Hu W , et al. Duplicate zebrafish runx2 orthologues are expressed in developing skeletal elements. Gene Expr Patterns 2004; 4: 573-81.]. These genes were found to be expressed in the developing zebrafish skeleton, including the pharyngeal arch, op, and pectoral fins, which coincided with zbmp3 expression patterns in the present study. These results suggest a functional overlap among runx2a, runx2b, and bmp3 in zebrafish.

To our knowledge, there have been no reports on the relationship between BMP3 and rheumatologial diseases. However, other BMP family members, such as BMP4, BMP6, and Runx2, are possible biomarkers of bone metabolism in several forms of arthritis since their expression patterns are different in OA and RA groups from those in controls [9Grcevic D, Jajic Z, Kovacic N , et al. Peripheral blood expression profiles of bone morphogenetic proteins, tumor necrosis factor-superfamily molecules, and transcription factor Runx2 could be used as markers of the form of arthritis, disease activity, and therapeutic responsiveness. J Rheumatol 2010; 37: 246-56.]. Based on our findings, further studies are warranted on the role of BMP3 in patients with rheumatic disease.

Gene duplication has been observed in the zebrafish genome due to an additional whole genome duplication event that is specific to the teleost fish lineage [10Catchen JM, Braasch I, Postlethwait JH. Conserved synteny and the zebrafish genome. Methods Cell Biol 2011; 104: 259-85.]. To study the conservation of Bmp3 function in vertebrates, we lastly performed a synteny analysis for zbmp3 with human BMP3 as shown in Fig. (3

Our results suggest that zbmp3 plays a role in the arch skeletal system in developing zebrafish. Functional analyses using genetically modified zebrafish are needed to better understand the in vivo biological functions of zbmp3. The relationship of BMP3 with OA and RA may also require further analysis.

Y.N. directed this study; M.I.A. and M.M. performed experiments and drafted the article; X.H., M.H., M.M., R.W. and H.K. contributed to conception and design, interpreted the data, and revised the article. All authors approved the final version.