The traditional and current use of Calotropis procera and C. gigantea, two soft-wooded, xerophytic shrubs of the family Apocynaceae, are reviewed against the background of the plants' chemical constituents and their biological properties. The focus is on the usage of the plants for building materials, natural pesticides, animal feed and bioremediative purposes.

Plants growing in arid regions have elicited increased attention, because the hostile environment, in which these plants survive, forces them to develop chemical protective systems rarely found in vegetation of other ecosystems. Furthermore, many of the plants grow in areas, where the dependence on traditional, plant-based medicines over industrially produced pharmaceuticals persists to this day. The two plants, Calotopris procera (giant milkweed, also named C. persica) and Calotropis gigantea (crown flower), have been used widely in traditional medicine in North Africa, the Middle East, and South and South-East Asia. This has led to extensive research on the chemical constituents of the plants. Both plants are known to be sources of cardenolides, and newer research has yielded a number of interesting cancer-active constituents. In addition, extracts of both plants have remarkable nematocidal, molluscidal and insecticidal activities. In many regions, the wood of Calotropis plants has been used as a building material and as a source of fuel. In addition, certain parts of the plants have been used as feed for livestock. In other regions, Calotropis plants are seen as invasive species that threaten local plant life and that due to their toxicity also pose a threat to grazing field animals. The complexity of the plants’ properties and chemical constituents combined with the wide geographic distribution and regional use of C. procera and C. gigantea has led to a fast-growing body of research on the two plants. For C. gigantea alone, approximately 120 research ent-

Calotropis procera (Ait.) R. Br. and Calotropis gigantea R. Br. are two species of soft-wooded, evergreen, perennial shrubs of the family Apocynaceae, and subfamily Asclepiadoideae (milkweeds). Traditionally, the two plants have developed in two separate regions of the world, one, C. procera, predominately in Africa and in the Middle East, the other, C. gigantea, in Asia. Due to rapid expansion, often with human help, today they share some of the same habitats in the same regions. 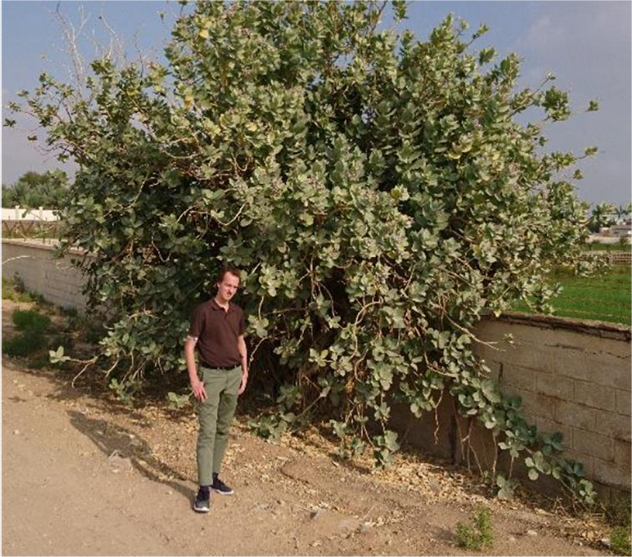 C. gigantea can grow to 4 m high, while C. procera is usually smaller, although in the Al Ain area in the United Arab Emirates, the plants can also grow up to 4.5 m in height (Fig. 1). The stem can be up to 25 cm in diameter [27Little, E.L., Jr; Woodbury, R.O.; Wadsworth, F.H. Trees of Puerto Rico and the Virgin Islands, 1974, 2, 1024.]. The opposite leaves of C. procera are large, up to 18 cm and up to 13 cm broad. Leaves of C. gigantea are up to 10 cm long and 8 cm wide [28Forster, P.I.; Little, D.J.; Nicholas, A. Asclepiadaceae, Flora of Australia., 1996, Vol. 8, 214.]. C. procera has a profusion of five-petaled, sweet-smelling white flowers, 3.8 to 5.1 cm in size, with a marked purple tip. The equally five-petaled flowers of C. gigantea are white to lavender in color, and in contrast to those of C. procera, without fragrance. The grey-green fruits of C. procera are 8 – 12 cm long, containing 350-500 seeds with tufts of white, silky hair. Similarly, C. gigantea exhibits single or paired fruits, 7-10 cm long, with a profusion of white tufted, brown seeds, 2.5 – 3.5 cm in length [29Jagtap, V.A.; Usman, M.R.M.; Salunkhe, P.S.; Gagrani, M.B. Anti-inflammatory activity of Calotropis gigantea Linn. leaves extract on in-vitro models Int. J. Curr. Pharm. Rev. Res, 2010, 1-5.]. The seeds of both plants are distributed by wind and water, but also by birds when the ripe pods burst. Flowering takes place all through the year. The plants propagate through suckering as well. Thus, crowns and roots form suckers, where also broken stems can take root and regenerate. Pollination happens through insects, mostly through bees or butterflies.

1.3. Historical Use of the Calotropis

In some early civilizations, C. procera fibers served in textile making, such as in Cyprus in 2000 BC [37Belgiorno, M.R.; Lentini, A.; Scala, G. The textile industry (2000 BC) of Pyrgos-Mavroraki (Cyprus). Archaelogical Textiles Newsletter, 2006, 25, 30.]. According to Kramer, the fibers from the inner bark were used in the manufacture of cloth for princes and nobles. Later, Calotropis was used to make string and cord in Oman [38Potts, D.T.; Reade, W.J. New evidence for late third millennium linen from Tell Abraq, Umm-Al-Qaiwain, UAE. Paéorient, 1993, 19, 96-106.], and in Borneo, seed hairs of the plant were made into threads. In India, the fibers have been called the bow-strings of India and have been used for rug and net-making as well as for sewing threads.

Always, the flowers of the plant have served decorative purposes. This continues to this day, even in countries where Calotropis has been introduced only recently, such as in Hawaii, where the flowers of C. gigantea are included in garlands (leis), and in the Philippines, where the flowers are used to decorate rosaries. In India, the maruts (storm deities) have been greeted with a garland of flowers of Calotropis on Saturdays for centuries. Nowadays, C. gigantea is sold as a plant for home and garden, specifically as a butterfly attractor in a number of countries [39Mikula, R. Butterfly plants for your garden, www.butterflybreeders.com/pages/bflygdning/butterflyplants.html2001.]. The ornamental potential of C. procera has been highlighted in a recent article [40Petrie, J.M.M. Arabian Desert Primer: Ornamental potential of hyperarid adapted plants from Saudi Arabia. Desert Plants, 2007, 23, 19-32.].

In general, the asclepias (milkweeds), which apart from the Calotropis species, include more than 140 species of plants, have long been included in traditional medicine and have been named after the Greek god of healing. The Greek-Arabian traditional medicine knows the Calotropis plant under the name of Madar and Ushar, where from ancient times, extracts and powders of different parts of Calotropis have been used. Both C. procera [under the name of Raktha Arka] and C. gigantea [under the name of Arka kalpna and Sweta Arka] have been described in the Aryuvedic classics [41Arya, S.K.; Agarwal, V.D. Antiquity of arka kalpna in Ayurvedic classics. Sacitra Ayurveda, 1985, 38, 477-480.]. C. procera was used medically by the ancient Egyptians [42Ebbell, B. A contribution to the earliest history of leprosy. Int. J. Lepr., 1935, 3, 257-263.], seemingly going back as far as the Neolithic period [43Greiss, A.M.E. Anatomical identification of plant remains and other materials from (1) El-Omari excavation at Helwan from the first dynasty. Bull. Inst. Egypte, 1955, 36, 227-235.], and the plant can also be found in the Sudanese traditional medicine [44Dieye, A.M.; Tidjani, M.A.; Diouf, A.; Bassene, E.; Faye, B. Senegalese pharmacopeia: study of acute toxicity and antitussive activity of C. procera (Ait.). Dakar Méd., 1993, 38, 69-72.
[PMID: 7882852] ] as well as in the traditional medicine of North and Central Africa and the Middle East in general and of Central Asia.

Lastly, in Africa, arrow poisons have been derived from the plants. It was this fact that led to the first modern, extensive investigations (Hesse) on the chemical constituents of C. procera, carried out in order to identify the chemical structures of the poisonous components, specifically the cardiac glucoside components.

2. CURRENT NON-MEDICINAL USE OF THE PLANT

2.1. Use as a Building Material

There has been a study carried out with C. procera grown in the southern coastal region of Puerto Rico, combining the use of C. procera as a biofuel and the use of the processed residues as animal feed [97Erdman, M.D. Nutrient and cardenolide composition of unextracted and solvent-extracted Calotropis procera. J. Agric. Food Chem., 1983, 31(3), 509-513.
[http://dx.doi.org/10.1021/jf00117a012] [PMID: 6886206] ]. It was found that the crude protein content of unextracted and extracted C. procera was comparable to that of Euphorbia, and was found to be of sufficient level for most goat, sheep, and cattle maintenance.

For human consumption, it has been reported that nectar crystals from dried flowers of C. procera have been used as a sugar substitute. Thus, in Java, the central part of the flower has been processed into a sweetmeat named Chinese candy [119Uphof, J.C.Th. Dictionary of Economic Plants., 1959, ]. On the other hand, it must be recognized that the nectar can contain poisonous components as well. Cases of fatal poisonings of humans with both C. procera and C. gigantea [120Bengal: Report of the Chemical Examiner for 1940 The British Pharmaceutical Codex, 1934, .] are known. In general, the cardenolides found in C. procera are toxic to vertebrates.

On the other hand, insects lead also to possible ways for a classical biological control of Calotropis. It has been noted that three pre-dispersal seed predators, the Aak weevil Paramecops farinosus, the Aak fruit fly Dacus persicus in the Indian subcontinent and the Sodom apple fruit fly Dacus longistylus in the Middle East can be seen as prospective biological control agents of the plant [173Dhileepan, K. Prospects for the classical biological control of Calotropis procera (Apocynaceae) using coevolved insects. Biocontrol Sci. Technol., 2014, 24, 977-998.
[http://dx.doi.org/10.1080/09583157.2014.912611] ].

2.11. Calotropis in Environmental Monitoring and Bioremediation

Calotropis procera and Calotropis gigantea are undemanding plants that, while being undesirable weeds in some regions, have economic potential as a source of fuel and chemical feedstock. The review, which is seen as part 1 of a two-part series, showed their use in providing construction materials and, in limitations, their utilization as animal feed. Extracts of C. procera and C. gigantea are employed widely as natural pesticides. The application of the two plants in bioremediation efforts, including in the monitoring of environmental pollutants in the soil was discussed, also.

I am completely satisfied with the service I received from Bentham Science Publishers, right from the submission of our research paper in ‘Open Chemistry’ to its publication in the journal. The reviewers' and editor's comments were very helpful in improving the paper.

I take this opportunity to express my appreciation to the whole team of BSP!