Concrete buildings on Guam are exceptionally strong but also accumulate large amounts of heat. In the tropical environment of Guam, where 24 h average temperature ranges from 28 to 29°C year round, air conditioning is used every day and continuously. Concrete roofs are often painted light colors, which make them more reflective and accumulate less heat. They are also suitable for establishment of vegetation, which results in a large decrease in roof temperature and therefore decreases the need for cooling.

The objective was to determine the magnitude of temperature reductions resulting from light color and from vegetation covering roof tops and to use this information to estimate energy savings.

Temperature was measured on the undersides of concrete model roofs in both sunny and rainy weather.

The differences were so large that use of green roofs on the tropical island of Guam, where most buildings are concrete and air-conditioning is needed year round, could cut a typical household's electric consumption in half.

Guam, a tropical island in the western Pacific populated by almost 180 thousand people [19US Census Bureau. Statistical Abstract of the United States. 131st ed. Washington, D.C. 2012.], serves as major year-round destination for 1.5 million Asian tourists annually [20Guam Visitor Bureau. Available at: http://www.guamvisitorsbureau.com [Accessed on: 15 Sep 2015]]. Because of frequent typhoons and occasional earthquakes since the 1950s, nearly all walls and roofs of residential and commercial buildings are constructed from solid concrete. Concrete buildings are exceptionally strong and safe but also accumulate large amount of heat. The heat is currently removed by air-conditioning units (AC), but the need for AC could be reduced if roofs were shielded from hot sun. Because concrete structures assure exceptional weight safety, roofs on Guam are suitable for establishment of vegetation. Abundant tropical rainfall and selection of appropriate plant species could eliminate or greatly reduce the need for irrigation, making roof vegetation relatively easy to grow and maintain.

The objective of this study was to determine the magnitude of temperature reductions resulting from vegetation covering roof tops and to use this information to estimate the impact of roof-top vegetation on the amount of energy needed to cool a typical residential house on Guam.

This study was conducted on Guam (13°N latitude). Eight 3.1m by 0.9m concrete plates were placed on concrete blocks 0.4m above the ground. The plates were 0.13m thick, were reinforced with steel bars, and resembled those used for an ordinary residential roof (Fig. 2 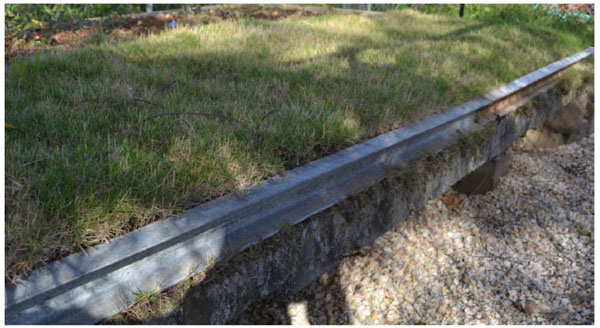 ). Each plate was divided into two 1.5m by 0.9m plots. Steel wire mesh was affixed to the surface of each plate, and a 10cm layer of turf substrate (Scotts Lawn Supersoil®) mixed with sand was spread over four plates on eight of the plots. The other eight plots were left without soil substrate. Four soilless plots were similar in color to a well-maintained concrete surface, and the other four were darkened to resembled a poorly maintained (and unfortunately quite typical) concrete surface covered by black fungi and algae.

Zoysia tenuifolia turf was established on four soil-covered plots from plugs, and full coverage was achieved within a year ("turf roof"). A mixture of indigenous weeds (monocots and dicots) was permitted to establish itself on the remaining four soil-covered plots and established full coverage within several months ("weed roof"). Turf was not mowed or fertilized after establishment but was lightly top-dressed with sand after a year. Weeds thrived and were trimmed occasionally. Turf roofs and weed roofs were irrigated only occasionally and during sunny periods suffered frequent water stress. Before data collection began, turf and weeds were thriving but were not irrigated. Data were collected during four 3-day periods. Two of the periods, January 19-21 and April 1-3, were without precipitation (sunny). The other two, Mar. 20-22 and September 27-29, encompassed multiple heavy rain events and substantial water runoff (rainy).

Temperature was measured on each plate’s bottom surface in five locations per plot with an infrared thermometer (Ryobi, Model E49IR01), and the resulting readings averaged. Temperature readings began around sunrise and were repeated every 3 h until sunset. Accuracy of infrared thermometer readings was evaluated by comparison to a direct method of 20 random readings taken with Traceable® probe. The differences were less than 0.5°C.

All data were analyzed with SAS 9.1.3 software (SAS Institute Inc., Cary, NC). Experimental design was an unbalanced split-plot design with repeated measures. The SAS-MIXED procedure was used to produce a table of Type III tests of fixed effects. Means were separated by means of Fisher’s LSD procedure at P < 0.05. 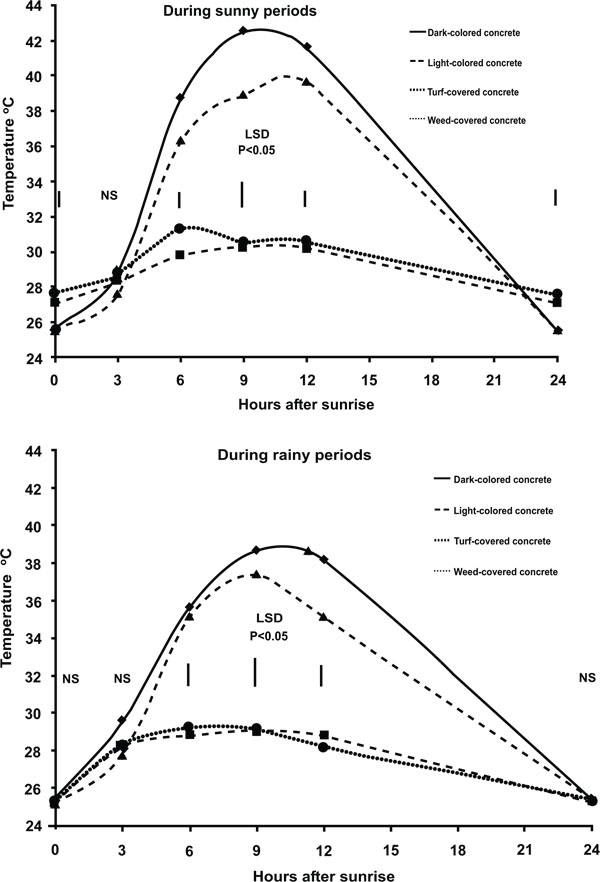 ). Temperature fluctuations in concrete under vegetation were small on both sunny and rainy days. On sunny days, light-colored concrete was about 3°C cooler than dark-colored concrete; on rainy days, temperature differences were smaller. Temperature of plates covered by turf was similar to that of roof covered by weeds. During sunny days, plates under vegetation cooled down more slowly than did bare concrete and remained at least 2°C warmer at the next sunrise. During rainy days, all plates reached the same temperature by the next sunrise.

In tropical locations, sunlight falls more nearly vertically than in other regions, so the roofs of buildings receive most of the solar energy. Because most residential houses on Guam are all concrete and without attics, the underside of the roof radiates heat directly into the living area. Powerful AC is therefore needed to offset heat generated by the roof inside the house. In the tropical environment of Guam, where 24 h average temperature ranges from 28 to 29°C year round, AC is used every day and continuously.


Temperature data indicated little difference between turf and a mixture of weeds, but zoysia turf is considered more attractive than weeds and, unlike weeds, requires infrequent trimming, every 2-3 years. In addition, the root system of zoysia turf is exceptionally dense, and should therefore attach itself more firmly to roofs and hold soil particles better than weeds. High root density would also make turf more resilient to occasional typhoons accompanied by extremely heavy tropical rainfall.