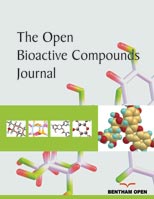 3 Department of Pharmacognosy, Faculty of pharmacy, Delta University for Science and Technology, Egypt

Biotransformation of khellin using Aspergillus niger ATCC 10549 resulted in the production of khellol. The biological activities of the transformed product and khellin were established by antioxidant and acetylcholine esterase inhibitory assays. Khellol exhibited a higher degree of antioxidant and acetylcholine esterase inhibitory activities compared to khellin. This is the first report on the biotransformation of khellin by microorganisms and the first evaluation of the neuroprotective activity of either khellin or khellol.

Melting points were determined on a Fisher-Johns Scientific Co. melting point apparatus, USA. The 1H-, 13C-, APT, DEPT NMR spectra were analyzed on JEOL JNM ECA at 400 MHz for 1H- and 100 MHz for 13C-NMR spectra. TLC was performed on aluminum sheets precoated with 0.2-mm silica gel 60 F254 (Merck). Plates were developed in a solvent mixture of n-hexane-ethyl acetate (3:7, v/v), and the developed chromatograms were visualized under 254- and 365-nm UV light and the spots were made visible by spraying with vanillin/H2SO4 reagent before warming in an oven preheated to 110 °C for 5 min to develop yellow color for khellin and khellol.

Using a two-stage fermentation protocol [7El-Sharkawy S. Microbial conversion of tamoxifen Appl Microbiol Biotechnol 1991; 35: 436-9.
[http://dx.doi.org/10.1007/BF00169745] ], screening was carried out by incubating the cultures while shaking at 200 rpm on New Brunswick Scientific G25 Gyratory shakers at 25 °C in a medium consisted of 2% glucose, 0.5% peptone, 0.5% yeast extract, 0.5% NaCl and 0.5% K2HPO4, adjusted to pH 7.0 before autoclaving for 15 min at 121 °C. Stage I culture was started by suspending spores and mycelia from filamentous fungal culture slants in 2 mL of sterile medium and transferring the suspension to 25 mL medium contained in 150-mL flasks. After incubation for 72 hours, stage II cultures were initiated by transferring 2 mL of stage I cultures to 150-mL flasks containing 25 mL medium. After 24 hours, khellin dissolved in dimethyl formamide (0.2 mg/mL medium) was added to the flasks. Culture controls consisted of fermentation blanks in which the organisms were grown under identical conditions but without substrate addition. Substrate controls were composed of a sterile medium to which the substrate was added and incubated without microorganisms. Samples (0.5 mL) of stage II cultures were extracted with EtOAc (2 mL × 3) every 24 hr for 15 days. The combined extracts were dried over anhydrous Na2SO4 and evaporated in vacuum at 40 °C. The dried extracts were reconstituted in 0.5 mL MeOH, applied to silica gel plates. The results of TLC analysis of EtOAc extracts of the culture broths of all microbes showed that Aspergillus niger ATCC 10549 could metabolize khellin to more polar metabolites after fourteen days. The fermentation screening procedures were repeated using Aspergillus niger ATCC 10549 to prove the reproducibility of the metabolite formation.

Khellin (500 mg) was evenly distributed among 25 (150-mL flasks), each containing 50 mL medium of 24-hr A. niger stage II cultures. The cultures were incubated for fourteen days (200 rpm, 25 °C) and extracted with EtOAc (1L × 3). The combined extracts were dried and evaporated to yield 430 mg yellow viscous residue. The residue was mixed with 400 mg of silica gel and placed on top of a silica gel column (l00 g, 1.5 × 72 cm). The column was isocratically eluted with 40% ethyl acetate in hexane. Fractions with identical Rf (TLC) were pooled.

The percentage of inhibition was calculated using the following formula:

The oxygen radical anti-oxidant capacity (ORAC) assay measures the free radical scavenging activity of the sample and its ability to prevent the oxidative degeneration of the fluorescence of fluorescein after being mixed with the peroxyl radical generator 2,2`-azobis (2-amidino-propan) dihydrochloride (AAPH) at 37 °C. The ORAC method was used as previously described, with 96-well plates [10Prior R, Hoang H, Gu L, et al. Assays for hydrophilic and lipophilic antioxidant capacity (oxygen radical absorbance capacity (ORACFL) of plasma and other biological and food samples J Agric Food Chem 2003; 51: 3273-9.]. Briefly, 200 µl of 94.4-nM fluorescein was added to each 20-µl sample, Trolox, and phosphate buffer to reach 75 mM, pH 7.4 (as blank), and the mixture was incubated at 37 °C for 10 min. Seventy-five microliters of 31.7 mM AAPH was added to each well, and fluorescence degradation was measured for 90 min at 30-sec intervals. Excitation at 485 nm and emission at 525 nm were measured using a FlexStation 3 Microplate Reader (Molecular Devices, LLC, Sunnyvale, CA, USA), and data were managed by SoftMax Pro® 5.4.1 software. The standard curve was linear between 0 and 50 mM Trolox.

Microbial transformation of khellin by A. niger produced one major spot on TLC with an Rf value of 0.2, which upon its isolation afforded a 150-mg (30%) colorless needle of the metabolite. This compound was identified by 1H- and 13C-NMR as well as co-chromatography with an authentic sample to be identified as khellol (Fig. 1 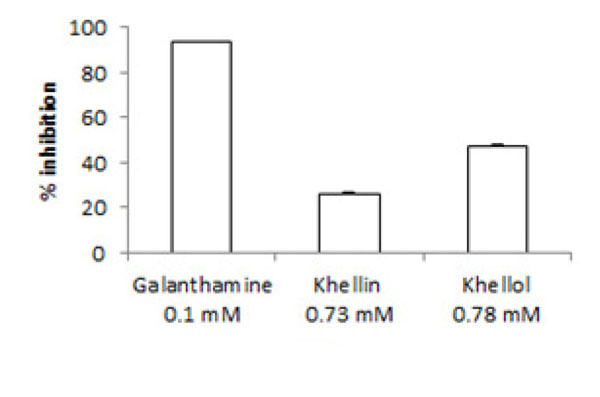 
The results of ORAC assay (Table 1) showed khellol have higher antioxidant activity in comparison with khellin so it was concluded that the biotransformation of khellin greatly improved the neuroprotective and antioxidant activity through the formation of khellol as a metabolite. We also isolated khellol from the unused part of A. visinaga, proving that the plant metabolism mimics the microbial metabolism.

The Egyptian Government is acknowledged for the fellowship support to Ahmed Adel Ashour.