Diabetes leads to metabolic abnormalities. These abnormalities produce problems in a variety of organ systems such as ophthalmopathies, neuropathies, nephropathies, and vasculopathies. Infertility is common in diabetic patients, caused by abnormal semen.

This study was conducted to check semen quality in diabetic Sudanese patients.

This is a retrospective cross-sectional designed study. The data were collected in a period from January 2015 to February 2017. A total of 600 individuals was included, 300 with type 2 diabetes mellitus and 300 apparently healthy as a non-diabetic. Semen analysis was performed according to WHO criteria.

Significant lower results were found in diabetic patients compared to non diabetic regarding the following parameters: volume of ejaculation (p = 0.047), percent motility (p = 0.001), percent normal morphology (p = 0.000), while there was no difference in the sperm count between diabetic and non-diabetic subjects.

This is a retrospective case-non-diabetic study conducted during the period, January 2015 to February 2017, at Dr. Elsir Abu-Elhassan Fertility Center in Khartoum, Sudan. The study subjects were 300 males with type 2 diabetes mellitus (patients). They were diagnosed by the endocrinologist according to WHO and American Diabetes Association guidelines [11Diagnosis and classification of diabetes mellitus. Diabetes Care 2014; 37(Suppl. 1): S81-90.
[http://dx.doi.org/10.2337/dc14-S081] [PMID: 24357215] ], and 300 non-diabetic apparently healthy males (non-diabetics) attending the laboratory of Dr. Elsir Abu-Elhassan Fertility Center as a routine investigation. Age was matched between the two groups. All participants were informed about the importance of the study and the consents were verbally obtained from the participants and they agreed to participate in this study.

BMI was calculated in the standard way: Weight (kg) divided by square of height (m). Waist and hip circumferences were measured to the nearest 0.1 cm using a flexible metric measuring tape with the subject in a standing position. Waist circumference was measured around the abdomen at the level of the umbilicus. WHR was calculated as waist circumference (cm) divided by hip circumference (cm). Semen was tested for volume, count of sperm, motility and morphology in each case as per the World Health Organization (WHO) criteria. The basic requirements for semen analysis were followed. These requirements were standardized by WHO guidelines that describe several procedures for an objective evaluation of the semen quality with diagnostic purposes. Data were analyzed using the Statistical Package for the Social Sciences (SPSS) version 21. Values were expressed as a mean and standard deviation. Independent t-test was used for comparison of different semen parameters among study groups. Chi-square test was used to determine the association of sperm motility with morphology among study groups. P-value ≤ 0.05 was considered as significant and all tests were done with 95% confidence intervals. 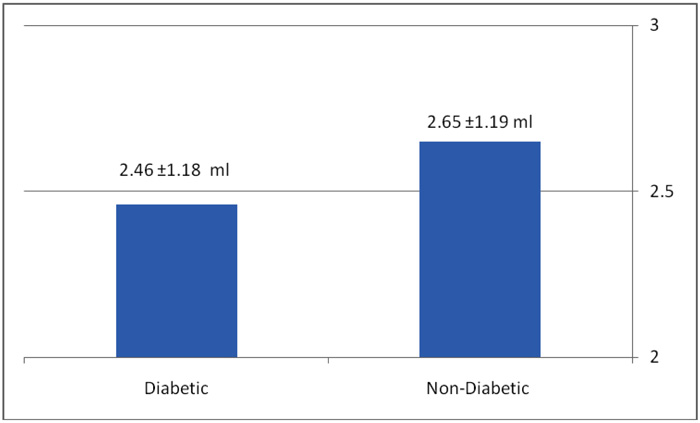 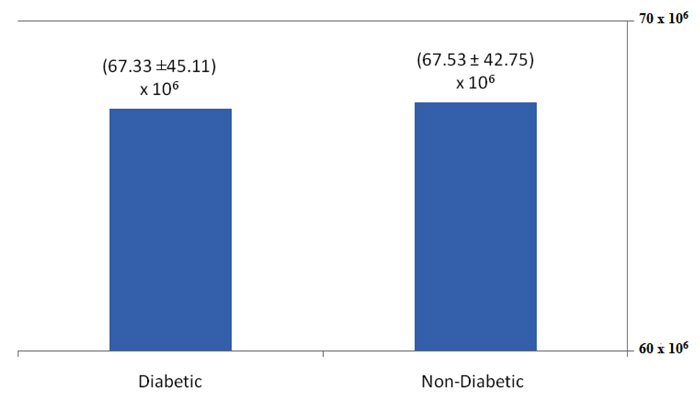 ). The results of sperm motility and morphology among study groups are shown in Fig. (3 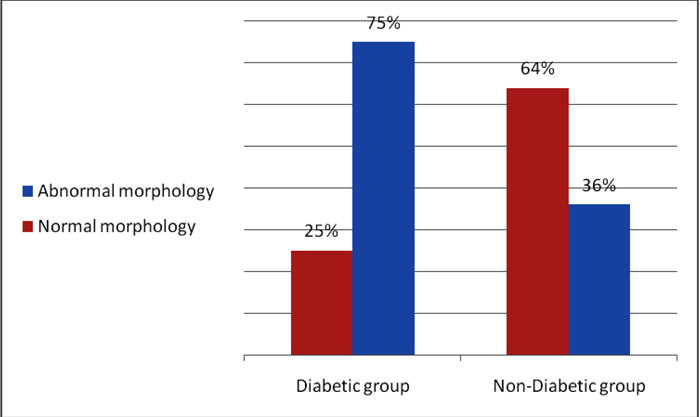 This study has shown that Sudanese males with DM had a significant reduction in the mean of semen parameters (semen volume, motility and morphology of sperm) compared to the non-diabetic group. This decrease in semen quality might be as a result of hormonal alterations, or morphological changes which occur in the testis which includes an increase in the interstitial collagen, thickness of the seminiferous tubules, peritubular fibrosis, intertubular fibrosis or gonadal disorders which result from poor circulation to the testis induced by DM. A high prevalence of abnormal sperm motility and morphology was also reported before in patients with DM [12Jangir RN, Jain GC. Diabetes mellitus induced impairment of male reproductive functions: A review. Curr Diabetes Rev 2014; 10(3): 147-57.
[http://dx.doi.org/10.2174/1573399810666140606111745] [PMID: 24919656] , 13Amiri I, Karimi J, Piri H, et al. Association between nitric oxide and 8-hydroxydeoxyguanosine levels in semen of diabetic men. Syst Biol Reprod Med 2011; 57(6): 292-5.
[http://dx.doi.org/10.3109/19396368.2011.621508] [PMID: 22047525] ]. These findings agree with Delfino et al. (2007) [8Delfino M, Imbrogno N, Elia J, Capogreco F, Mazzilli F. Prevalence of diabetes mellitus in male partners of infertile couples. Minerva Urol Nefrol 2007; 59(2): 131-5.
[PMID: 17571048] ] that reported significantly lower results of the percent of normal sperm morphology and motility in diabetic patients compared to the non-diabetic group. Considering the morphology of sperms, it is a fact that the sperm cells being rapidly proliferating cells can be an easy target of damage by this oxidative stress caused by diabetes and abnormal sperm shape [14Taken K, Alp HH, Eryilmaz R, et al. Oxidative DNA damage to sperm cells and peripheral blood leukocytes in infertile men. Med Sci Monit 2016; 22: 4289-96.
[http://dx.doi.org/10.12659/MSM.898631] [PMID: 27837200] ]. In fact, sperm morphology is probably the most difficult part of semen analysis to perform, and it is not easy to interpret, but the authors of this study confirmed that the part was well done according to WHO criteria, so it is suggested to conduct other studies in Sudanese with larger sample size that might be more helpful to confirm this difference. In contrast to the findings of morphology and motility, Agbaje et al. 2007 [15Agbaje IM, Rogers DA, McVicar CM, et al. Insulin dependant diabetes mellitus: Implications for male reproductive function. Hum Reprod 2007; 22(7): 1871-7.
[http://dx.doi.org/10.1093/humrep/dem077] [PMID: 17478459] ] reported that there is a reduction in semen volume in diabetic men compared to non-diabetics, while other semen parameters did not show a significant difference. Furthermore, diabetes was associated with increased DNA damage that may impair the reproductive capability of these men [16Agbaje IM, Rogers DA, McVicar CM, et al. Insulin dependant diabetes mellitus: Implications for male reproductive function. Hum Reprod 2007; 22(7): 1871-7.
[http://dx.doi.org/10.1093/humrep/dem077] [PMID: 17478459] ].

In the present study, there was no significant difference between diabetic patients and non-diabetics regarding sperm count and concentration. This finding comes in line with Delfino et al. (2007) they noted. Sperm concentration did not show significant differences between diabetic patients and non-diabetics [8Delfino M, Imbrogno N, Elia J, Capogreco F, Mazzilli F. Prevalence of diabetes mellitus in male partners of infertile couples. Minerva Urol Nefrol 2007; 59(2): 131-5.
[PMID: 17571048] ]. Conversely, findings were concluded by Ali et al. (1993) [9Ali ST, Shaikh RN, Siddiqi NA, Siddiqi PQ. Semen analysis in insulin-dependent/non-insulin-dependent diabetic men with/without neuropathy. Arch Androl 1993; 30(1): 47-54.
[http://dx.doi.org/10.3109/01485019308988368] [PMID: 8420505] ]. They observed that there was a significant increase in total sperm count and sperm concentration in patients with type 1 and type 2 DM in comparison to non-diabetics. Another study conducted in Sudanese males demonstrated that a significant reduction in all semen parameters (semen volume, sperm count, motility and morphology) was observed in diabetic patients when compared with non-diabetics [17Abdullah AE MAEFMEMM. The association between male infertility and diabetes mellitus. J Pharm Biomed Sci 2014 2014 Jul; 12(4): 1097-2.]. The higher proportion of abnormal motility and abnormal morphology may be the result of poor metabolic non-diabetic, neuropathy, oxidative stress, and damage of sperm nuclear and mitochondrial DNA caused by diabetes mellitus. Our study showed that, regarding 1.7 fold, 5.2 fold higher ORs of abnormal sperm motility and morphology, respectively, diabetes may be associated with a higher risk of male infertility.

However, our study is limited by some factors. First, as most studies were based on a case-non-diabetic design, selection bias was possible. Second, semen analysis is a type of laboratory test that is difficult to standardize across different studies.

This study indicated that DM had negative effects on semen quality mainly semen volume, sperm motility and morphology. Furthermore, larger studies are needed to evaluate the causative mechanisms responsible for these changes as well as possible treatment.

This study was approved by the ethical committee of Al-Neelain University.

Verbal consent was obtained from all the participants.

This study was supported by Dr.Elsir Abu-Elhassan Fertility Center. The authors of the study gratefully acknowledge the center for their help and support.