Expression of Nuclear β-Catenin in Rectal Versus Colonic Cancers

open-access license: This is an open access article licensed under the terms of the Creative Commons Attribution Non-Commercial License(http://creativecommons.org/licenses/by-nc/3.0/), which permits unrestrictive use, distribution, and reproduction in any medium, provided the original work is properly cited.

Adenocarcinomas of the rectum and colon can be different with regard to the cellular biological basis for cancer development.

However, clinical observations indicate that there can be biological differences between these two localizations. Adenocarcinomas located within the rectal cavity have a higher local recurrence rate and a lower rate of distant and peritoneal metastases than colonic cancers [1-5]. The incidence of lymph node metastasis has been shown to be higher in rectal tumors than in colonic tumors [6,7] and the risk of lymph node metastases increases from proximal to distal direction of the rectal cavity [8]. The beneficial effect of adjuvant chemotherapy is larger in colonic cancers than in rectal cancers [9]. The effect of radiotherapy also differs between colonic and rectal adenocarcinomas [10].

Local relapse, distant metastases, the effect of treatment and the prognosis of cancer patients depend on the biology of the tumor. Hence, we hypothesize that molecular biological differences are responsible for the differences in clinical behavior between colonic and rectal adenocarcinomas. There are few studies where the molecular biological differences between colonic and rectal adenocarcinomas have been investigated [4, 11, 12].

Abnormally located β-catenin plays a central role in colorectal tumorigenesis [13] by being part of the signalling cascade of the Wnt pathway [14]. β-catenin plays its key role in tumorigenesis in association with APC [15,16]. Mutations in either β-catenin or APC can distort the normal tumor suppressive effect of APC [15]. Somatic mutations of the APC gene causes malfunctioning APC in 80 % of colorectal cancers [13]. This malfunctioning APC fails to reduce the level of cytoplasmic β-catenin [13,17]. The resulting increased level of cytoplasmic β-catenin induces transcription through the TCF/LEF pathway [13], leading to increased proliferation rate of the cancer cells.

Many studies have been performed on different aspects of the relation between β-catenin and colorectal tumors, but few have investigated the expression patterns of β-catenin in rectal carcinomas and made comparison to the findings in colonic cancers [3,18].

The aim of the study was to compare the expression pattern of β-catenin between colonic and rectal adenocarcinomas.

Sections (3 - 4 micrometers) from formalin fixed, paraffin wax embedded archive tumor tissue were applied to coated slides. After antigen retrieval by microwaving (20 min at 100 degrees Celsius), immunostaining with anti-β-catenin (Novocastra Laboratories, Newcastle upon Tyne, UK, dilution 1:300) was performed in Autostainer (Dako Corporation, Carpentaria, USA), according to the operation protocol. The antibody was visualized for light microscopy with Envision Plus-System and diaminobenzidine (DAB). Counter-staining was done with Hagen’s haematoxylin for visualization of tissue structures. Positive control was a test block with multiple colonic adenocarcinomas with diverse differentiation.

We counted the percentage of positive nuclei semi quantitatively by applying four grades of immunopositivity, 0, 1, 2 and 3. Only nuclear staining was recorded. When 60 % or more of the nuclei were stained, we scored the tumor as grade 3 (Fig. 3 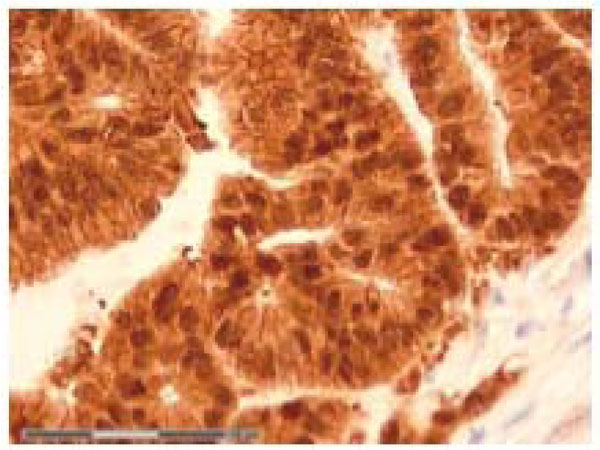 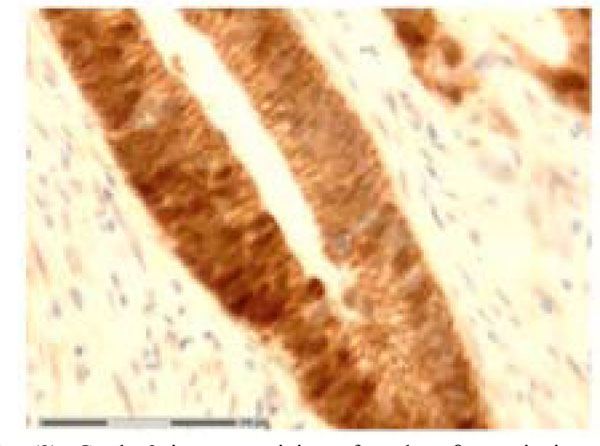 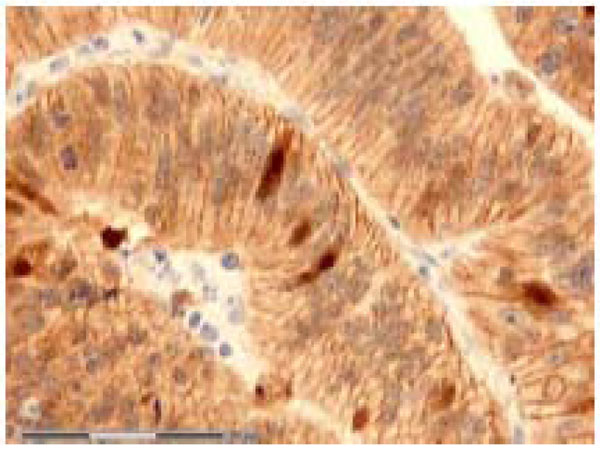 ). No nuclear immunostaining at all qualified for grade 0 (Fig. 4 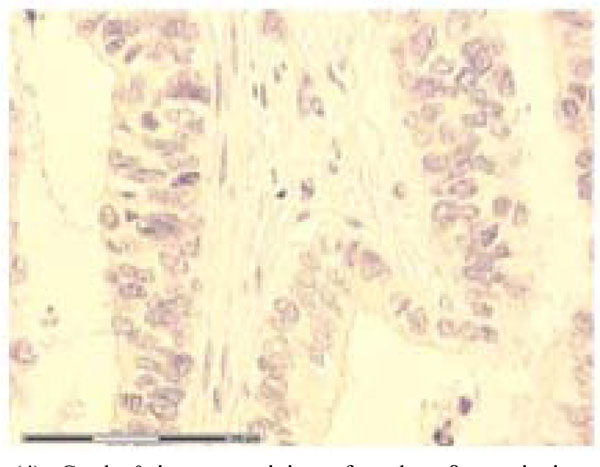 ). Only clearly nuclear staining was recorded as positive. Almost all slides contained normal adjacent mucosa in addition to the cancer. The normal mucosa served as an internal control. The slides were judged independently by three investigators (RAa, IRKB and JB). At least 100, usually more than 1000 cells were examined in each slide.


The slides of the colonic material of Bondi et al. were produced and classified in the same way [19].

Statistical analyses were performed by SPSS version 14.0 running on Windows XP. Binary logistic regression analysis was used to evaluate the levels of β-catenin expression in rectal cancers compared to colonic cancers. This comparison was also done by means of one-way ANOVA. Survival analyses were carried out by Cox regression. Test plot for proportional hazard was performed. We chose an alpha level of statistical significance of p<0.05.

Table 1 shows the main characteristics of the rectal cancers.

The tumors were classified according to Dukes’ classification of 1932 with the addition of a class D introduced by Turnbull et al. in 1967 [20] in such a way that the Dukes A, B, C and D classes correlate to the stages I, II, III and IV based on the TNM-classification [21]. The TNM classification of each cancer was also recorded. Patients were followed up according to the Norwegian guidelines for colorectal patients for five years after surgery.

From a total of 274 rectal carcinomas, 235 were available for evaluation of β-catenin protein expression.

The results of the immunostaining of nuclear β-catenin are shown in Table 2.

The same comparison was also performed by means of binary logistic regression analysis. In this analysis we adjusted for Dukes stage, patient age, T-stage, and tumor differentiation grade. This analysis also showed a highly significant difference between rectal and colonic cancers concerning the expression level of nuclear β-catenin (p< 0.00001. OR=31.7, 95 % CI for OR [16.8; 59.9]). The nuclear expression of β-catenin was higher in rectal compared to colonic adenocarcinomas. None of the other parameters included in the analyses, except T-stage, showed any statistical difference between colonic and rectal adenocarcinomas. The T-stage was higher in the colonic adenocarcinomas than in the rectal adenocarcinomas (p=0.009, OR=0.452, 95 % CI for OR [0.250; 0.818]).

No statistically significant correlation was observed between nuclear expression of β-catenin in rectal cancer and cancer specific survival, distant metastasis nor local relapse of the cancer.

We found a higher protein expression of nuclear β-catenin in rectal cancers than in colonic cancers. The difference was highly significant.

The percentage of nuclear β-catenin expression was higher in the present study than in previously published data. We observed nuclear β-catenin expression in 94.9 % of the tumors, which is higher than observed in studies performed by Gunther et al. [18] and Kapiteijn et al. [3]. The reason for this discrepancy is difficult to explain exactly, but it is possible that the composition of patient groups between these studies may have been different regarding tumor stage.

Translocated β-catenin leads to increased expression of cyclin D1 [24] and c-Myc [25], which may turn up the proliferation capacity of the tumor cells. Tumor cells with high proliferation rate may expand locally fast, escaping from the immune system. This can cause a local recurrence that is of clinical significance. The results from the present study support, and in part explain why local relapse may be a more pronounced problem in rectal cancer. The results may also partly explain the necessity of not leaving any cancer behind when doing surgery. A few rectal cancer cells left behind can multiply rapidly because of the high proliferation rate of the tumor cells, leading to clinically significant local recurrence.

A more rapid growth of a localized tumor does not necessarily lead to more distant metastases. This may be why there is no significant association between nuclear expression of β-catenin and cancer specific survival. Rectal cancer patients die from distant metastasis and not from a localized tumor in the pelvic cavity alone. If handled correctly, a local relapse need not necessarily lead to mortality, but is associated with high morbidity.

We have in the present study observed a highly significant difference in nuclear expressed β-catenin between colonic and rectal adenocarcinomas, even when adjusted for other histopathological and clinical parameters. This difference in the cellular biology between these two localizations may in part explain the differences observed in clinical practice.

The study and the manuscript preparation were funded by the South-Eastern Norway Regional Health Authority and the University of Oslo.