Third generation cephalosporins are still most commonly used antibiotics empirically in our setup leading to emergence of resistance in this group. In this environment of increasing resistance, empirical use of this group of antibiotics would be a futile effort. Therefore, this study was conducted to evaluate the in vitro efficacy of fourth generation cephalosporin cefepime against multi-drug resistant isolates of Pseudomonas aeruginosa from various clinical specimens in our setup.

Place and Duration of Study:

All the clinical specimens giving growth of Pseudomonas aeruginosa were included in the study. Modified Kirby-Bauer disk diffusion method was used for sensitivity testing. Isolates resistant to three or more than three groups of antibiotics were included in the final results.

A total of 100 multi-drug resistant Pseudomonas aeruginosa isolates were cultured from various clinical specimens. Out of 100 isolates, 71% were resistant to cefepime while resistance rate of amikacin, gentamicin, ceftazidime, tazobactem/piperacillin, sulbactam/piperacillin, imipenem and polymyxin were 61%, 83%, 72%, 10%, 2%, 45% and 2% respectively.

Drug resistance in Pseudomonas aeruginosa is alarming as it is now increasing even in newer generation of drugs. It is the need of hour to follow strict hospital infection control and antibiotic policies to halt the spread of this resistance.

open-access license: This is an open access article licensed under the terms of the Creative Commons Attribution Non-Commercial License (http: //creativecommons.org/licenses/by-nc/3.0/ which permits unrestricted, non-commercial use, distribution and reproduction in any medium, provided the work is properly cited.

Pseudomonas aeruginosa is an oxidase positive, non-fermenter and produces visible pigments, characteristics which are used for its rapid diagnosis in the laboratory. It is also a part of normal skin flora of humans but can cause life threatening opportunistic infections specially in immunocompromised hosts [1]. It has been implicated in diverse group of infections such as otitis externa, burn wounds, decubitus ulcers, cystic fibrosis, urinary tract infections, ventilator associated pneumonia (VAP) and septicemia specially in neutropenic and transplant patients. It has posed a serious problem in nosocomial infections specially in intensive care units (ICUs) because of its innate resistance to many antibiotics [2]. It has also been involved in biofilm formation particularly in cystic fibrosis patients with its unique characteristic to develop resistance to all antibiotics with prolonged therapy [3]. In recent years, multi-drug resistant (MDR) Pseudomonas aeruginosa specially in burn wounds and decubitus ulcers has emerged rapidly creating serious problems for the clinicians [4].

About 50% of the antibiotics prescribed are irrational (wrong dose or duration, antibiotics in viral infections) leading to the emergence of resistant isolates [5]. With the extensive use of third generation cephalosporins (most widely prescribed antibiotics) in hospitals, now many isolates are resistant to even this class of antibiotics [6]. Cefepime is the most active fourth generation cephalosporin which was introduced in 1993. It has rapid penetration into the periplasmic space as compared to third generation cephalosporins and has more activity against gram positive and gram negative organisms. It has remarkable activity against MDR isolates of Pseudomonas aeruginosa, Klebsiella pneumoniae, Citrobacter spp, Serratia spp, Proteus mirabilis but is less active against Bacillus fragillis [4]. It is ineffective against methicillin-resistant strains of Staphylococcus and Enterococcus spp. It can be used in the management of pneumonia, skin and soft tissue infections, urinary tract infection and neutropenic patients. It is the best empirical choice for the treatment of hospital acquired infections specially in intensive care units [7]. Because of its stability against many beta-lactamases and being a poor inducer of AmpC beta-lactamases, it can be used against those Enterobacteriaceae which are resistant to third generation cephalosporins.

This laboratory based descriptive study was carried out in the department of Pathology, Combined Military Hospital Dera Ismail (D.I.) Khan, Pakistan. A total of 100 MDR Pseudomonas aeruginosa isolates from various clinical specimens were included in the five months study period from January 2011 to May 2011. This hospital receives specimens for bacterial culture mainly from District Hospital, and Mufti Mehmood Teaching Hospital D.I. Khan. Specimens from the patients admitted in Combined Military Hospital D.I. Khan were also included in our study. Pus/pus swab specimens were mostly from burn patients, wound infections, and diabetic foot ulcers. Ear swabs were from patients suffering from chronic suppurative otitis media (CSOM). All the sputum specimens were from patients suffering from COPD while paired blood specimen was collected for blood culture. Repeat or multiple specimens from same patients giving growth of Pseudomonas aeruginosa were excluded from the study.

After incubation period, zone diameters around the disks were measured with a scale in millimeters and each zone size was compared with known standards [8]. The isolate was then labelled as sensitive, resistant or intermediate depending upon the zone size. A Pseudomonas aeruginosa resistant to three or more group of antibiotics was considered as MDR. Antibiotics giving zone sizes in the intermediate ranges are usually not effective against that isolate, however, increased dose of that antibiotic can be given if there are no other therapeutic options [9]. 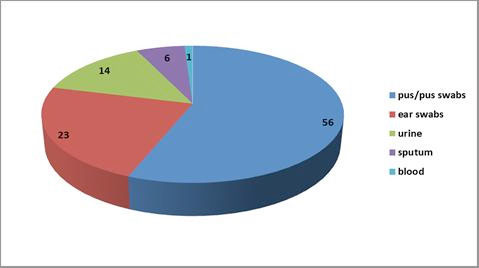 Most effective drug in our study against Pseudomonas aeruginosa was sulbactam/piperacillin followed by tazobactem/piperacillin. Comparison of sensitivity pattern of cefepime with other antibiotics is shown in Table 2. Majority of the isolates were resistant to five antibiotics as depicted in Fig. (2 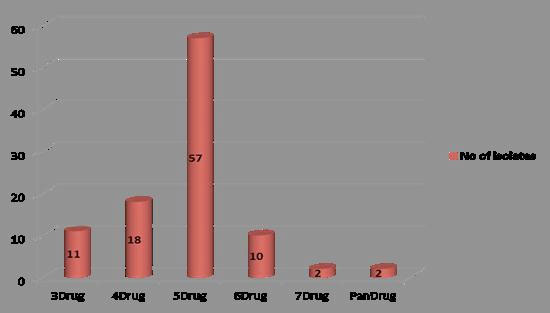 ). There were two isolates from pus which were even resistant to polymyxin that is pan-resistant Fig. (3 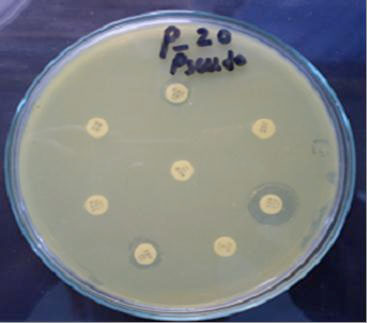 Polymyxin B and colistin are older antipseudomonal drugs which have re-emerged in the settings of increased drug resistance [16]. They are now reserved as last option in treating MDR Pseudomonas aeruginosa. In our study, there were 2 isolates from burn patients which were even resistant to polymyxin (pan-drug resistant). Pandrug resistant isolates are a major concern for the clinicians as the therapeutic options are limited and presently the only choice left is polymyxin. Polymyxin has been used with success in cases of meningitis and pneumonia, but has been associated with renal toxicity [17]. The sensitivity pattern in our study shows that the resistance to even polymyxin is increasing adding to the miseries of patients.

Our study concludes that Pseudomonas aeruginosa, a lethal pathogen in hospital environment specially in burns and ICU patients is becoming resistant even to newer antibiotics such as cefepime. It is not only creating a grave challenge for the clinicians but is also very difficult to eradicate from the hospital environment. The main reasons for this critical situation are irrational use of antibiotics, poor hospital infection control policies, substandard drugs and lack of knowledge of organism’s innate resistance to antibiotics. If timely interventions/measures are not taken to prevent further resistance, then we may have to say that we are nearing towards the end of antibiotic era.