How to effectively transfer and exert a pressure on drills in lateral drilling, and to raise the efficiency of rock-breaking and rate of penetration in a bid, is the key technology to improve the quality, speed and economic benefits of lateral drilling. Therefore, based on high pressure jet of 16-hole and 7-hole nozzles, which are suitable for lateral drilling in oilfield at the present stage, we carry out a research on the hydraulic calculation of high pressure water jet flow and the mechanism of rock-breaking. We use three-dimensional modeling software to establish models, and analyze the high pressure water jet velocity field combined with numerical simulation software. According to different injection, we calculate the local head of the two nozzles when the working fluid is pure water and the liquid-solid two phases of 4% solid content respectively, through the simulated relational expression between the local head and the injection rate to calculate the maximum speed of each hole and to ensure rock-breaking critical injection of 16-hole and 7-hole nozzles, then compare and analyze the rock-breaking effect of these two kinds of drill bits, at the same time to analyze the influence of nozzles angle on the effect of rock-breaking, so as to optimize the perfect angle of the nozzle and to provide theoretical basis for the popularization and application of lateral drilling high pressure jet rock-breaking.

HPWJ is applied to the mining industry at the earliest, until in 1990s, Americans adopted the plunger type down hole booster technology to increase the pressure of 1/10 drilling fluid to about 200MPa in the well bottom, and did auxiliary bit rock-breaking experiments, which improved drilling rate by 1.5 ~ 2.5 times [12H. Ni, R. Wang, and Y. Zhang, "Numerical simulation study on rock breaking mechanism and process under high pressure water jet", Applied Mathematics & Mechanics, vol. 26, no. 12, pp. 1595-1604, 2005.
[http://dx.doi.org/10.1007/BF03246268] ]. Meanwhile, China has made rapid progress in the technology of water jet cutting in the recent 10 years [13H.U. Zhongwei, L.I. Gensheng, and T.A. Zhijun, "Technology of hydra-jet sidetracking of horizontal micro-radial laterals", Petroleum Drilling Techniques, vol. 41, no. 4, pp. 37-41, 2013.], and this kind of technology has made remarkable achievements on the research and application of oil jet drilling [14Jinhua Chen, Qianting Hu, and Fujin Lin, "Study on combined breaking coal and drilling with high pressure water jet and mechanical bit", In: 2010 International Conference on Mine Hazards Prevention and Control, United States, 2010, pp. 446-452., 15S.D. Veenhuizen, J.J. Kolle, C.C. Rice, and T.A. O’Hanlon, "Ultra-high pressure jet assist of mechanical drilling", In: Proceedings of the Drilling Conference, Amsterdam, Netherlands, 1997, pp. 79-90.
[http://dx.doi.org/10.2118/37579-MS] ].

In this paper, we established a three-dimensional model based on two kinds of bits which are supplied by the Daqing field. Meanwhile, with the application of numerical simulation software, according to the analysis of high water jet velocity field and mechanism of rock-breaking produced by designed nozzles are established. By the simulated relational expression between local head and the injection, combining the relationship of the compressive strength of sandstones, shear strength and the critical speed of rock-breaking, we can ensure the critical speed of rock-breaking, calculate these two kinds of bits' critical injection of rock-broking, analyze the properties of nozzle structure parameters and the nature of the working liquid influence rock-breaking, and optimize the best nozzle angle, so as to provide theoretical support for the application and provide theory support for the popularization of this technology in the field.

2. THE ESTABLISHMENT OF MODELS

When setting up the model, the structure of well bore and bits’ parameters data should be considered firstly. The structural parameters of well are provided by Daqing oilfield are summarized in Table 1. The schematic diagram of HPWJ rock breaking is shown in Fig. (1 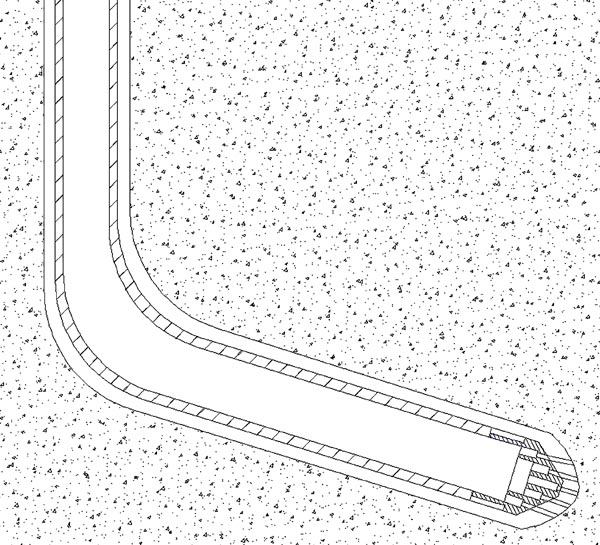 
Drill bits are mainly divided into two kinds and the detailed structural parameters of the bits are showed in Fig. (2 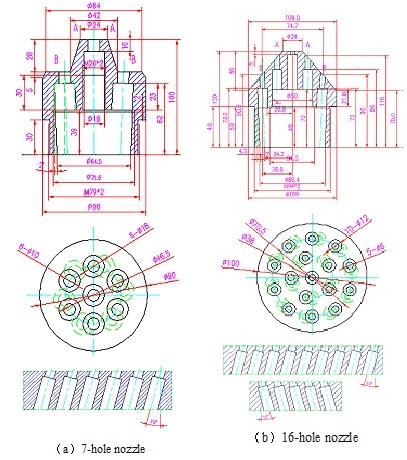 Table 1
The structural parameters of well in daqing oilfield.

After the 3D models were built in solidworks software, they will be segmented into several parts and all that will be divided into the grid structure type in the Gambit software. The model of dividing mesh will be simulated in FLUENT software using arbitrary Lagrange-Euler algorithm.

To make nozzles to attain the drilling footage successfully, the destruction area of water jet is required to be greater than the largest cross-sectional area of nozzles, so that the nozzles can move forward and debris can be drained. A simple method to judge whether the hit area exceeds the maximum area of the nozzle or not is when the diffusion of water jet produced by nozzle exceeds the equivalent radius in striking areas and the speed of water jet is still over the rock-breaking critical speed. Therefore, other external factors such as the diffusion, frictional resistance and fluid resistance of water jet should also be taken into account during the actual rock-breaking. After the water jet leaving nozzles and touch rock, it is a requirement to have rock-breaking critical speed vs can make rock-breaking succeed.

Based on the theorem of momentum,

The maximum theoretical striking force at the object surface that the water jet act on can be obtained whenθ=180°,that is:

The flow formula is:

The pressure formula is:

Based on the Zhonghou Shen’s experimental conclusion, the critical pressure equation for high pressure water jet to break rock is:

Based on the shear strength and the formula (2)(3)(4)(5), the rock-breaking critical speed vs of water jet can be expressed as below:

In the formation of about 1000 meters, there are mainly medium-sandstone and mud. The compressive strength of medium-sandstone is 47.74 Mpa. Aim at medium-sandstone, we can get rock-breaking critical speed, vs respectively when the working fluid is pure water and liquid-solid two phases.

When the working fluid is pure water, the rock-breaking critical speed is shown in formula 7 below:

4. ANALYSIS OF ROCK-BREAKING CRITICAL SPEED OF EACH HOLE IN NOZZLES

When the working liquid is water and liquid-solid two-phase, with numerical simulation software, we simulated the maximum flow velocity of each hole in 16-hole and 7-hole bits' at different injection rates and get the curve between the maximum speed and the injection rate, which is shown in Fig. (3

At the same time, the curve simulate the critical injection corresponding with rock-breaking critical speed of each hole, the data are shown in Table 2.

Taking the 16-hole nozzle as the research object, we choose the depth of well is 1000m, the length of high pressure pipe is 50m, and the injection rate is 1.85m3/min. The following are the calculation result and analysis of high pressure jet flow field, we calculate the velocity field in direction of Y when 5 holes in the inner ring and 10 holes in the outer ring counterclockwise and clockwise tilt 5°, 8°, 10°, 12° and 15°, respectively along the tangential direction.

), by comparing the speed of jet section in center hole and the speed, shape of jet section at the distance of 5mm away from the center hole, when nozzles tilt at angles of 10° and 15° we find the cross section configuration of jet flow to be more regular than others. However, when the nozzle tilt at an angle of 15°, the thickness of nozzles' thread will be reduced and its strength cannot meet the requirements. When the tilt angle is 10°, the maximum speed at central nozzle is the largest, reaching 180m/s, while in the direction of cross Y at the distance of 5mm away from the outlet section of the central nozzle, the maximum speed is 110m/s, at this moment, the efficiency of rock-breaking is better than other designed nozzle angle. Therefore, we take the angle of 10°as the first choice.


6. THE INFLUENCE OF BIT NOZZLE ON THE ROCK-BREAKING EFFICIENCY

We have demonstrated the use of the commercial software products Solidworks and FLUENT for creating models of complex High-pressure water jet bit and simulated fluid flows through the hole spaces. Through the simulation results, we can get the following conclusion:

A significant advantage of using FULENT, or another platform, is the ability to simulate many different kinds of bit with multi-angles and fluids flowing through it. In this study, we have carried out simulations of the influence of bit nozzle on the rock-breaking efficiency. Future studies may look at different number of holes and their distribution on the efficiency of rock fragmentation.