In this study, computer simulation software called PVTSim was used to predict hydrate formation phase boundary of synthetic natural gas composition of the Keta basin of Ghana at pressure and temperature ranges of 43.09 bar - 350 bar and 12.87 °C - 27.29 °C respectively. The effect of changes in natural gas composition (N2 and H2S) and the presence of four commonly used thermodynamic gas hydrate inhibitors (methanol, ethanol, diethylene glycol and monoethylene glycol) on the hydrate formation phase boundary is also discussed. Prior to the study, the accuracy of PVTSim was validated with the hydrate formation phase data in literature.

Currently water removal, depressurisation, heating and chemical inhibition are the available methods to prevent hydrate formation, but chemical inhibition is currently used since it is economical and practically applicable than the other methods. Thermodynamic Hydrate Inhibitors (THIs) such as alcohols and glycols are injected to change the hydrate formation conditions of the hydrate free zone. THIs shift hydrate phase boundary to a lower temperature and higher pressure by reducing the water activity, allowing the actual field operations outside Hydrate Stability Zone (HSZ) to have suffiecient inhibition. The type and amount of inhibitor needed to prevent hydrate is important in every production flow assurance sector for economic and environmental reasons. THI are added at relatively high concentrations of about 10 wt% - 60 wt% in the acqueous phase. Methanol and glycols are still actively used in the industry for hydrate mitigation [17K.A. Bullin, and J.A. Bullin, "Optimizing methanol usage for hydrate inhibition in a gas gathering system", In: GPA Annu. Conv. Proc, 2004, pp. 1-10., 18J. Yang, A. Chapoy, S. Mazloum, B. Tohidi, and G. Hydrate, "A novel technique for monitoring hydrate safety margin", SPE 143619, pp. 23-26, 2012.].

In PVTSim, the natural gas hydrate phase condition predictions are modelled as proposed by Munck et al. [32J. Munck, S. Skjold-Jørgensen, and P. Rasmussen, "Computations of the formation of gas hydrates", Chem. Eng. Sci., vol. 43, pp. 2661-2672, 1988.
[http://dx.doi.org/10.1016/0009-2509(88)80010-1] ], which is derived from the van der Waals’ and Platteeuw model and adapts the Langmuir adsorption theory for determining natural gas molecule occupying a cavity in the hydrate structure. The modified Peng-Robinson (PR) equation of state with the Peneloux volume correction parameter is used by PVTSim to calculate the fugacity parameter in the Langmuir equation.

The simulation was done by inputting each natural gas system in Table 1 into PVTSim and the hydrate phase conditions data was predicted using Peng-Robinson (P-R) equation of state. The hydrate phase boundary pressures and temperatures in the range of study (43.09 bar - 350 bar and 12.87 - 27.29 °C) were generated in the PVTSim and plotted in a P-T graph for each natural gas system for analysis. These pressures and temperatures conditions were selected to cover a wide range of normal industrial operational conditions. In order to study the effect of changes in N2 and H2S on the hydrate phase boundary of the Keta natural gas system, the N2 and H2S composition was increased by 5 mol% and 10 mol% and their respectively hydrate phase boundary pressures and temperatures were generated. N2 and H2S were selected, as they are generally considered as impurities in natural gas streams, and since their compositions in Table 1 are slightly above 1 mol%, it’s appropriate to study their possible compositional increasing effect on the Keta natural gas composition. Furthermore, the effect of four commonly used thermodynamic gas hydrate inhibitors; namely, methanol, ethanol, diethylene glycol and monoethylene glycol were studied on the Keta natural gas composition at a concentration of 10 wt%. The studied concentration (10 wt%) was chosen as it falls within the normal range industry inhibitor application as reported by Yussof et al. [33M.H. Yousif, "Effect of underinhibition with methanol and ethylene glycol on the hydrate-control process", SPE Prod. Facil., vol. 13, pp. 184-189, 1998.
[http://dx.doi.org/10.2118/50972-PA] ] as 24 wt%. 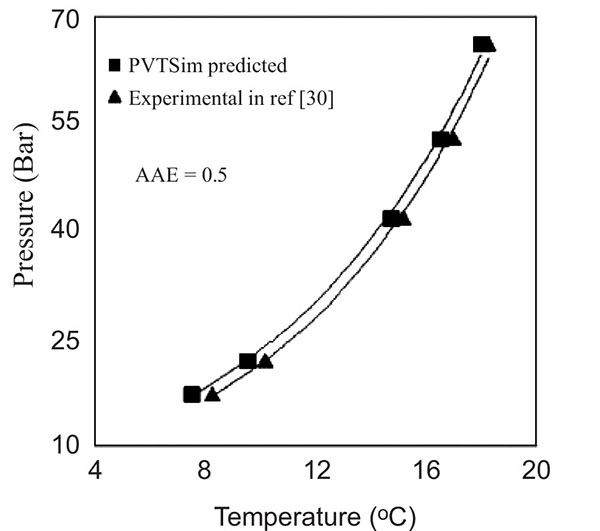 ), the PVTSim predicted data agreed with the experimental data with an Average Absolute Error (AAE) of 0.5. This validates the accuracy of PVTSim in simulating the hydrate equilibrium phase of the synthetic natural gas composition of Keta basin. 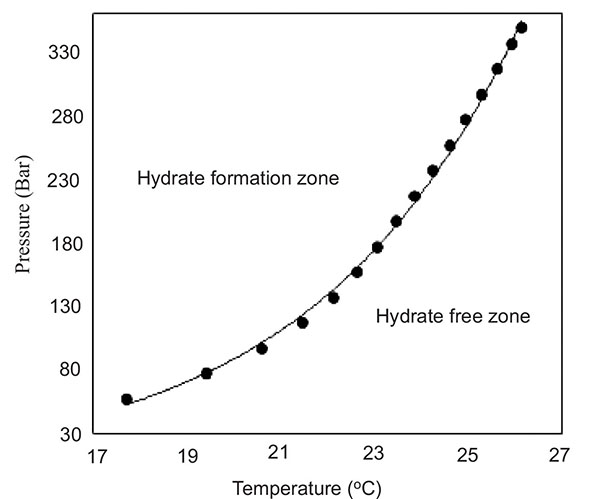 3.2. Effect of N2 and H2S Composition on the Hydrate Equilibrium Phase Boundary

Natural gas consists primarily of methane, however, depending on the field location and production life of the field, impurities such as N2 and acids gas (CO2 and H2S) may be present or may have their composition increased. In such cases the hydrate phase boundary of the new composition is necessary for safe operations and/or mitigation of hydrate threat since changes in natural gas composition affects hydrate equilibrium curve phase. Fig. (4 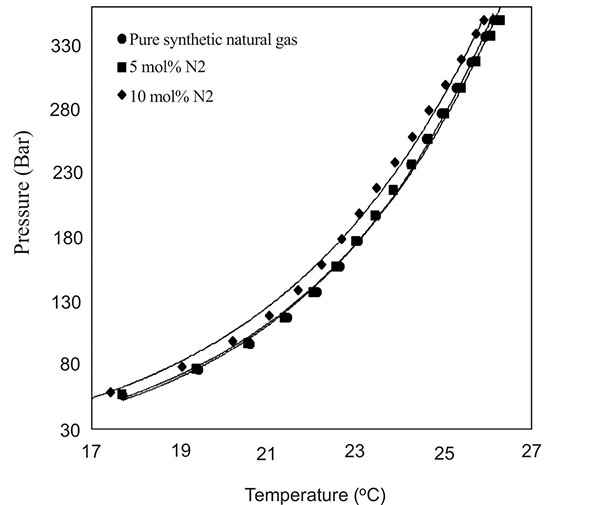 ) shows the effect of increasing N2 composition at 5 mol% and 10 mol% on the Keta synthetic natural gas system. From Fig. (4 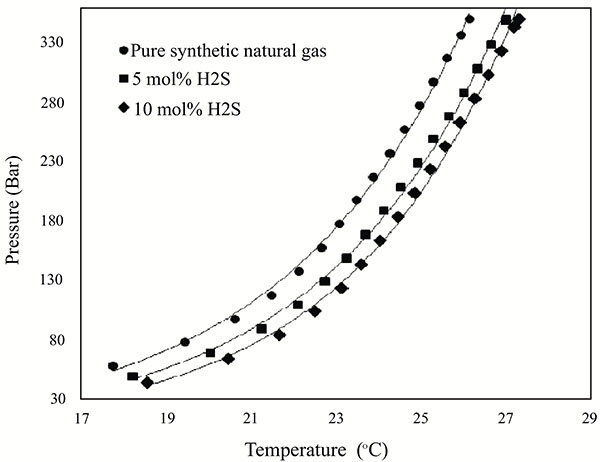 
3.3. Effect of Inhibitors on the Hydrate Equilibrium Phase Boundary 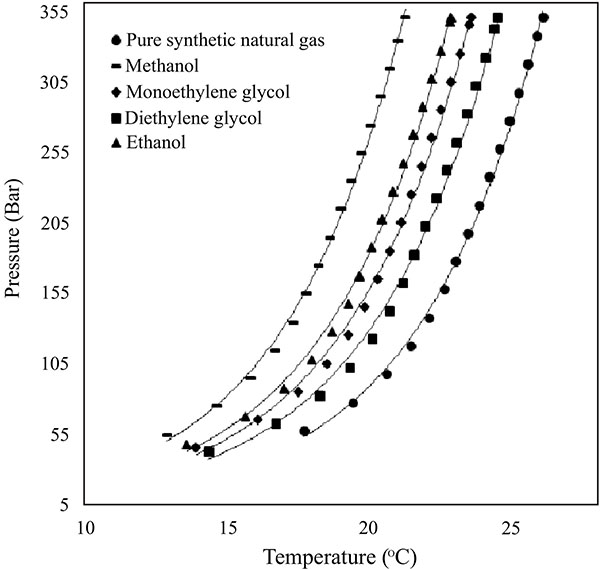 ). All the gas hydrate inhibitors used in the study reduced hydrate formation threat in the system at 10 wt% by shifting the hydrate equilibrium curve to high pressures and lower temperatures region. Generally, the alcohol based inhibitors showed high inhibition than glycol based, with methanol showing the highest inhibition impact. The increasing order of inhibition impact of studied inhibitors is; diethylene glycol < monoethylene glycol < ethanol < methanol. This implies that, among all the inhibitors used in this work, methanol is the best thermodynamic gas hydrate inhibitor, to inhibit gas hydrate formation of the synthetic Keta natural gas composition system.

The hydrate equilibrium phase boundary behaviour of a synthetic natural gas composition of Keta basin in Ghana is predicted at pressure and temperature ranges of 43.09 bar - 350 bar and 12.87 °C - 27.29 °C, respectively, using PVTSim version 21. Prior to the simulation the accuracy of PVTSim was validated by predicting the experimental hydrate equilibrium data in open literature with an AAE of 0.5. From the study, the following conclusions can be drawn:

The finding in this work is relevant in ensuring hydrate free operation in the development and production of oil and gas at the Keta basin of Ghana.

The authors are very grateful to the Petroleum Engineering Department of University of Mines and Technology (UMaT), Tarkwa, Ghana for supporting this research.