This article aims to study the effects of shock-disturbed cracks on the cutting features of cone bits. By utilizing the Walsh’s model, a crack model was established for the damaged rock surrounding the induced hole, the intrusive coefficient of the cone bit was derived, and the drilling rate equation around the induced hole was formulated. The effects of crack density and disturbance frequency on elastic modulus, intrusive coefficient, and cutting force were studied. With an increase in crack density, both the effective elastic modulus and the intrusive coefficient decreased. Under a certain range of internal friction angle, with an increase in crack density, the drilling rate increased. Under a certain axial load, as the disturbance frequency increased, the cutting force of one-cone bits decreased.

Large diameter rotary drilling rigs are inefficient and their cone bits suffer serious wear when used in hard rock drilling. To address this drawback, the new technology of shock-induced drilling is presented, and the principle is shown in Fig. (1 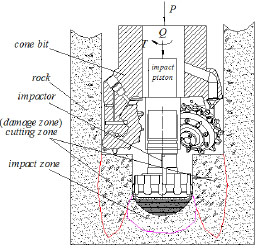 The principle of shock-induced drilling is shown in Fig. (1

). First, the impactor was used to drill the center hole; the strength of the rock mass is weakened by the redistribution of the stress around the induced center hole. Second, the low cutting force on the damage zone can crush the rock. P is the axial pressure, Q is the impact load, and is the rotary torque. 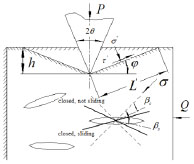 3.1. Effect of Cracks on Elastic Modulus

) shows the forces for the damaged rock under the drilling tooth. In Fig. (3

The dimensionless functional relationship between the macroscopic and the microscopic parameters can be expressed as follows [17T. Saksala, "3D numerical modelling of bit-rock fracture mechanisms in percussive drilling with a multiple-button bit", International Journal for Numerical and Analytical Methods in Geomechanics, vol. 37, pp. 309-324, 2013.
[http://dx.doi.org/10.1002/nag.2088] ]:

Assuming that σc is the stress which causes the crack face contact, then the normalized stress can be defined as follows:

If σ̂ < 1, a crack at any orientation would be open, so the elastic modulus can be expressed as follows:

where γ is the crack density parameter, and Eeff is the effective modulus. If the normalized elastic modulus is defined as, Ê = Eeff / E then the normalized modulus of the damaged rock containing randomly open cracks, N, would be expressed as:

). The normalized elastic modulus under the condition of loading is:

where Copen and Csliding are the compliance of the open cracks and the sliding cracks, respectively; their values can be expressed as:

Under the impact load Q, the applied compressive axial stress is assumed to increase to a certain value σmax, then the value would begin to decrease. The decrease of the compressive stress can be considered as a tensile stress. If the value of the applied stress is reduced to a certain value σ = σmax - Δσ, the shear stress would produce the relevant decreased Δτ on the crack, meanwhile the frictional resistive stress will decrease Δτf. The condition of the reverse sliding is:

Therefore, the condition of the reverse sliding can be expressed as:

where βrs is the critical angle of the reverse sliding.

3.2. Drilling Rate of the Cone Bit on the Damaged Rock

), the normal stress σ' `and the shear stress τ' could be expressed as:

The damaged rock around the induced hole will be crushed if:

where µ is the internal friction coefficient, the intrusion depth of the tooth is:

where K is the intrusion coefficient, 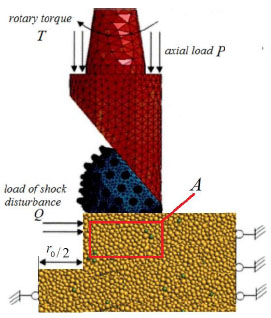 
The experimental system is shown in Fig. (5

) shows the experimental principle and the experimental system, respectively. The specimen size is 400 mm x 400 mm x 500 mm (length x width x height). Before the test, the surface of the specimen is polished by a grinder. The induced hole is then drilled with the impactor at different frequencies 0, 15, and 30 HZ. The diameter of the center hole is 100 mm and the depth of the hole is 400 mm. Then the specimen is pushed to the right place by the oil cylinder. Finally, the cutting force of a single cone bit around the center hole was tested under the same axial loads. The simulated and experimental results are shown in Figs. (6 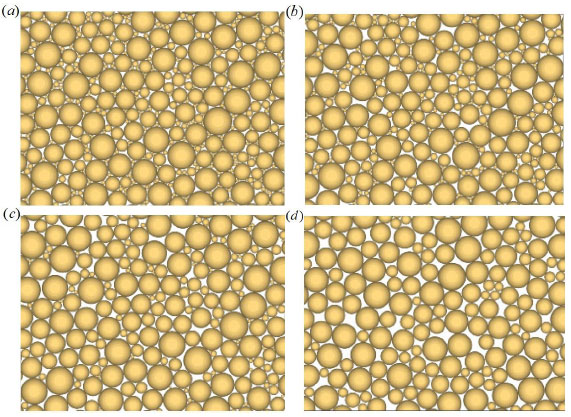 
When the disturbance force is constant, the cracks of the region A in Fig. (4

) under the condition of different disturbance frequency, shown in Fig. (6

) shows the curves between the effective modulus and the normalized stress, and the curves of the stress-strain at different crack densities, γ = 0.2, 0.5, and 0.8, The friction coefficient is the fixed value µ = 0.6. Considering that the effective modulus is calculated by no-interaction rules, so the compliance (1 / Ê) is a linear function of the crack density γ. The compliance, non-linearity, and the hysteresis loop are more pronounced with the increase of the crack density, as illustrated in Fig. (7

Research studies [11E.C. David, N. Brantut, A. Schubnel, and R.W. Zimmerman, "Sliding crack model for nonlinearity and hysteresis in the uniaxial stress–strain curve of rock", International Journal of Rock Mechanics and Mining Sciences, vol. 52, pp. 9-17, 2012.
[http://dx.doi.org/10.1016/j.ijrmms.2012.02.001] ] commonly assert that after the closure of the cracks in the damaged rock, it can be considered an undamaged elastic body. This result is suitable for hydrostatic stress, but not for impact loading. Under high stress, even when most of the cracks are closed, the effective modulus of the damaged rock is never equal to the value of the undamaged rock, and the value of the damaged rock is 70%–90% of E. In Fig. (7b

), at the beginning of unloading, the slope of the curve did not depend on the microstructural parameters of the damaged rock and the undamaged rock modulus E can be acquired .

) shows the friction angle dependence of the intrusion coefficient and the drilling rate for the different crack densities, γ = 0.2, 0.5, and 0.8. In Fig. (8a

From the aforementioned analysis, the error of the simulation is acceptable for the application in this present paper. As such, the model can be used to analyze and predict the cutting force of the damaged hard rock.

(1) The new technology of shock-induced drilling is presented and the crack model of the damaged rock around the induced hole was built. Subsequently, the effective elastic modulus of the damaged rock under the condition of the impact loads was analyzed, and the results showed that the effective elastic modulus significantly decreased with the increase of the crack density.

(4) The numerical simulation could reveal the cutting phenomenon. However, the error between numerical results and the experimental measurements still existed. Thus, the developed model is required to be further verified. More comprehensive experimental testing procedure is needed to calibrate the model, including the test of the triaxial compression, the test of the direct shear and the test of the fracture mechanics. The use of these test results for model calibration could allow the better tuning of the model and subsequently improve the qualitative results in the rock cutting.