Enhanced oil recovery (EOR) provides a significant contribution for increasing output of crude oil. Alkaline-surfactant-polymer (ASP), as an effective chemical method of EOR, has played an important role in advancing crude oil output of the Daqing oilfield, China. Chemical flooding utilized in the process of ASP EOR has produced concerned damage to the reservoir, especially from the strong alkali of ASP, and variations of micropore structure of sandstones in the oil reservoirs restrain output of crude oil in the late stages of oilfield development. Laboratory flooding experiments were conducted to study sandstones’ micropore structure behavior at varying ASP flooding stages. Qualitative and quantitative analysis by cast thin section, scanning electric microscopy (SEM), atomic force microscopy (AFM) and electron probe X-Ray microanalysis (EPMA) explain the mechanisms of sandstones’ micropore structure change. According to the quantitative analysis, as the ASP dose agent increases, the pore width and pore depth exhibit a tendency of decrease-increase-decrease, and the specific ASP flooding stage is found in which flooding stage is most affective from the perspective of micropore structures. With the analysis of SEM images and variations of mineral compositions of samples, the migration of intergranular particles, the corrosions of clay, feldspar and quartz, and formation of new intergranular substances contribute to the alterations of sandstone pore structure. Results of this study provide significant guidance for further application to ASP flooding.

Micropore structure study of sandstone in the reservoir reveals and provides explanations for transformations within the reservoir’s macroscopic properties, providing insight to reservoir scale formation and permeability, especially quantified the formation damage [23A.S. Shedid, "A novel technique for determining microscopic pore size distribution of heterogeneous reservoir rocks", Petrol. Sci. Technol., vol. 25, pp. 899-914, 2007.
[http://dx.doi.org/10.1080/10916460500423205] ]. In this study, outcrop core and reservoir core sandstone micropore structure variations are analyzed prior to and following strong alkaline ASP flooding. With the comparison analysis of outcrop core in different flooding stage in lab and reservoir core under longtime ASP flooding in oil field, we may determine which stage the flooding in the industrial production is beneficial for EOR. Rock samples were removed from the identical formation and position of the Daqing oilfield prior to and following 10 years of strong alkaline ASP flooding. Four stages, i.e. 10, 50, 100, 500 pore volume (PV) of laboratory strong alkaline ASP flooding for outcrop core before industrial production ASP flooding were completed. Cast thin section, SEM, AFM were employed to characterize the microstructure of sandstones qualitatively and quantitatively in every stage. Electron probe X-ray microanalysis (EPMA) was utilized to determine component change within the sandstones. Analysis results indicate that features and mechanisms of variations of microstructure of sandstones vary within stages of strong alkaline ASP flooding.

All the samples were collected from Daqing oilfield, one of the biggest oilfields in the world. The productions of Daqing oilfield has reached over 4.0×107 tonnes every year for more than 40 years under the application of water flooding, polymer flooding and ASP flooding.

The core samples for laboratory ASP flooding were collected from group PI3 of well Xing 2-1-J29 in the No. 4 oil production plant of the Daqing oilfield where the well area location was water flooded for 3 years. Sample cores, extracted in 1998, were well stored on site in drill core stores at the Research Institute of Exploration and Development of the Daqing oil field. Porosity of samples was 27.2%, permeability was 961 mD and displacement pressure was 0.036 MPa.

Core samples of industrial production ASP flooding were collected for comparison analysis from group PI3 of well Xing 2-10-J3E7 which is located well Xing 2-1-J29 27 metres away. These core samples were extracted in 2008 and have been flooded with strong alkaline ASP for 10 years. Porosity of samples was 27.1%, permeability was 197 mD and displacement pressure was 0.077 MPa.

Core samples extracted for laboratory ASP flooding were cut into one inch diameter cylinders and sliced into pieces (Fig. 1 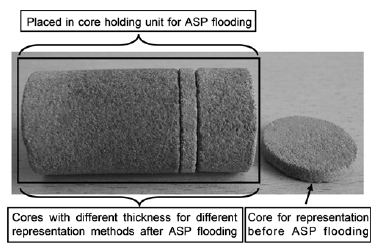 ). Samples were then segregated to be represented prior to ASP flooding and also to be represented at progressive flooding stages until 500 PV. For the reasons that the representation will destroy the samples and it is difficult to do the in-situ observations for micro representation, several parallel sample pieces were flooded simultaneously, and when the flooding reached to the given stage (10 PV, 50 PV, 100 PV, 500 PV), some of these stone pieces were taken out from core holder for various representations and the remaining were continuously flooded. The injection rate was 0.1~0.2 mL/min, and the flooding temperature was 45 degrees centigrade (matched to the temperature of flooding formation of mining area). After flooding, the surfaces of stone pieces were rinsed by distilled water for 5 minutes and naturally dried for SEM, AFM, and EPMA representations.

). Although the SEM and AFM both are the important scanning probe microscopy, the SEM images got by signals of electrons and the gray of images only represent the intensity of signals of electrons, while AFM images got by signals of force and the gray of images represent the intensity of force between AFM tip and sample or the altitude of sample surface, so they can show us the different characters of samples. Prior to laboratory flooding, particles in sandstones are complete with intergranular boundaries and retain clear appearance with clay particles loosely attached to the larger particles (Fig. 2

), 50 PV, 100 PV, SEM and AFM image), which indicates particles in the pores are driven away or dissolved, thereby the pores become enlarged (obviously be seen in Fig. (2

), 50 PV, 100 PV, AFM images). Presence of residual flooding agents or new substances generated in sandstones during large flooding stage is then indicated by a bridge structure emerging in the small pores (SEM image, 500 PV) when the flooding stage reaches 500 PV causing particle surfaces to exhibit the state of convex point (AFM image). Change of positions of particles and the pore structures or pore surfaces mean that the micro structure property of sandstone has significantly changed with the ASP flooding process.

Qualitative analyzing of slight sandstone microstructure variations at various flooding stages through SEM images is quite feasible. Quantitative analysis, however, is challenged as the gray image of SEM does not sufficiently represent height and depth information of sandstone surface. AFM images do contain the three dimensions of information for sample surface, allowing the quantitative changes in separate ASP flooding stages to be derived. Following the quantitative derivation of the width and depth of sandstone micropores [24Y. Bai, X. Zhu, J. Wu, and W. Bai, "Micropore structure representation of sandstone in petroleum reservoirs using an atomic force microscope", Chin. Phys. Lett., vol. 28, p. 080701, 2011.
[http://dx.doi.org/10.1088/0256-307X/28/8/080701] ], the complete variation mechanism of sandstone micropores in distinct ASP flooding stages may also be achieved.

), which are in the original state. In the early ASP flooding stage, small pores (pore width < 0.5 μm) mostly reduce while large pores increase and pores with width 10 μm disappear (Fig. 3B

). This phenomenon means that the fine particles are washed out of stone sample with flooding fluid (the fine particles can be seen in the draining of flooding by eyes and microscopy) or flock to some large pores. At middle and later ASP flooding stages, small pores increase (Fig. 3D

), pore width = 9.5 μm and 10 μm) at the later ASP flooding stage. These mean that some new small pores emerge and new structures generate and block some large pores. The complex transformation of pore width indicates multiple mechanisms in flooding which comprehensively determine the variations of shapes of sandstone pores.


The AFM image, representing the surface depth of sample, is utilized to count depth of micropores (Fig. 4 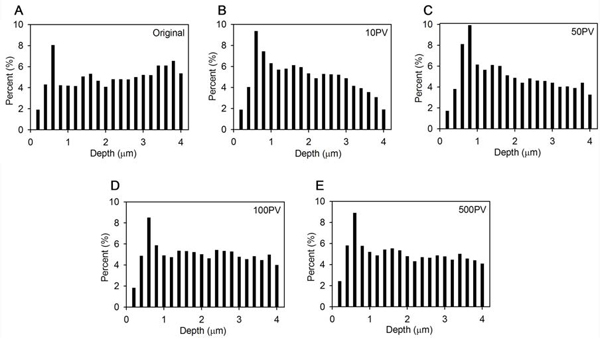 ) for a full micropore analysis at various flooding stages. Prior to laboratory flooding, the pore depths distribute more evenly with characteristic peaks at 0.6 μm, 1.6 μm, and 3.8 μm (Fig. 4A

). These peaks mean that the distribution of pore size is not uniform, and different characteristic peaks present the different pore structure property. Following 10 PV ASP flooding, peak of 0.6 μm increases, and peak of 3.8 μm disappears, simultaneously, the percentage of larger pores decrease wholly (Fig. 4B 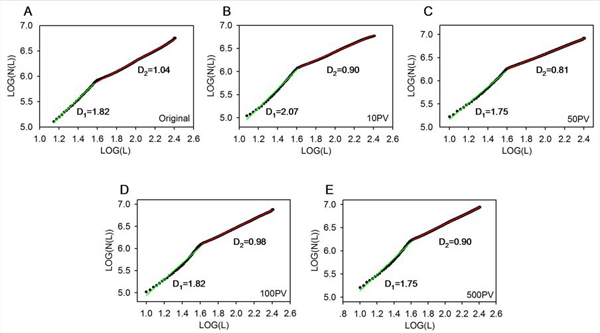 ) illustrates dual-segment linearity of logarithms for number of pores with depth L (number of characteristic length, N(L)) versus logarithms of pore depth (characteristic length) counted from AFM images. Fractal dimensions (D=d(LOG (N (L)))/d(LOG (L))) of section 1 (small pore, D1) are from 1.75 to 2.07 and fractal dimensions of section 2 (large pore, D2) are from 0.81 to 1.04 with ASP flooding stages. The alternation of fractal dimension indicates the complexity of sandstone pore behavior, allowing analysis to determine a superior ASP stage from the perspective of pore geometry. 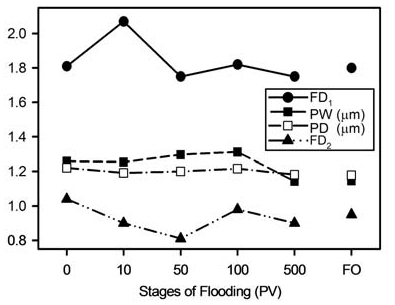 
3.3. Mechanisms of the Variations of Micropores Structure

The microspore structures of sandstones transformed in ASP flooding as illustrated above. Complicated mechanisms involving physical and chemical interaction in the flooding process may determine the micropore behavior response.

3.3.1. The Migration of Intergranular Particles

) depicts the distribution of intergranular particles prior to ASP flooding (Fig. 7A

). Meantime, the fine particles can be seen in the draining of flooding by eyes and microscopy. Migration of intergranular particles (mainly clay) at early ASP flooding stage initiates damage as reflected in the reduced mean pore size of sandstones (Fig. 6

) depicts common worm-like kaolinite prior to ASP flooding (Fig. 8A

) and seldom found and the surface of sandstone particles become smoothly (Fig. 8B 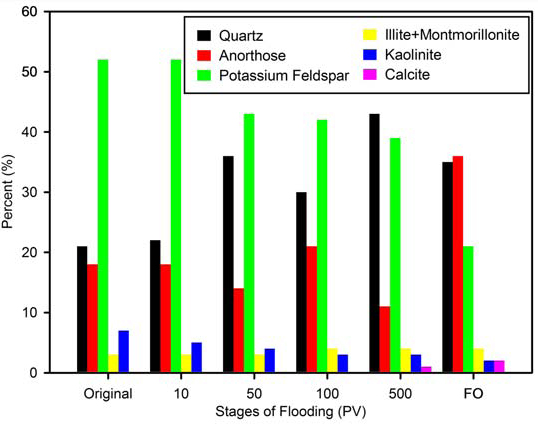 
3.3.3. The Corrosions of Feldspar and Quartz

) illustrates the comparison of quartz corrosion and feldspar prior to ASP flooding (Fig. 10A

3.3.4. The Formation of New Intergranular Substance

New structures are formed between the particles of sandstones as ASP flooding increases. (Fig. 11

and B), as indicated by red arrows). These structures do not appear in lesser ASP flooding stages. Sheet structures are mostly bridging styles between particles of sandstones (Fig. 11B, C


The intergranular precipitate, mainly silica, is consistently produced in the process of ASP flooding. Fig. (12 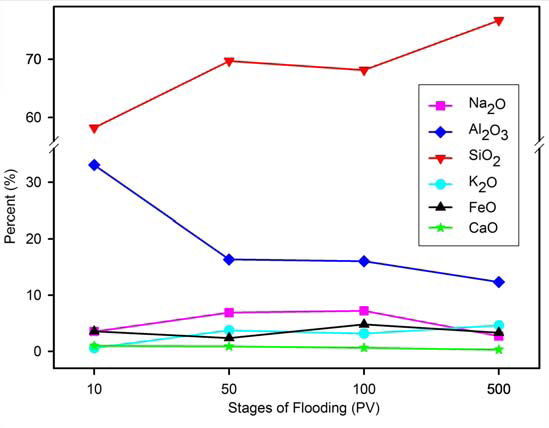 ) presents the quality percentage of intergranular substance attained by electron probe micro-analysis (EPMA). In the process of ASP flooding, the proportions of Al2O3 (part components of kaolinite and feldspar) decrease with the corrosions of clay and feldspar, while the SiO2 increase forming scale and precipitate between particles of sandstones.

3) The migration of intergranular particles, the corrosions of clay, feldspar and quartz, and formation of new intergranular substances contribute to alterations in sandstone pore structure.