Since the fragile anisotropy of shale, it is difficult to carry out laboratory experiments of geostress by shale cores. The existing geostress calculation model that is based on the homogeneous hypothesis also cannot meet the accuracy requirement. Therefore, it is necessary to establish the new geostress calculation model and test methods which are suitable for shale and provide the effective guidance for drilling and fracturing.

Firstly, the triaxial stress experiments were carried out. It showed that the mechanical parameters had strong difference between parallel and vertical bedding direction. The characteristics of transversely isotropic were shown obviously. Then, the geostress calculation model which considers the mechanical parameters of anisotropy in different direction was established by the constitutive relation of transversely isotropic materials. Finally, it was assumed that there is no relative displacement between formations in the process of deposition and the late tectonic movement; the prediction method for the shale geostress was established by the adjacent homogeneous formation. The sensitivity factors and influence laws were analyzed for the horizontal bedding shale geostress.

The results showed that the shale geostress was controlled by the elastic parameters of its own and the adjacent beds’.

The research can provide the theoretical basis and easy way for calculating the shale geosterss.

2. THE EXPERIMENT OF MECHANICAL PROPERTIES

The shale rock mass has good bedding structure, which leads to anisotropy of the mechanical properties of shale. The horizontal bedding shale of Liaohe Oilfield was selected as the research object. The bedding developmental state is shown in Fig. (1 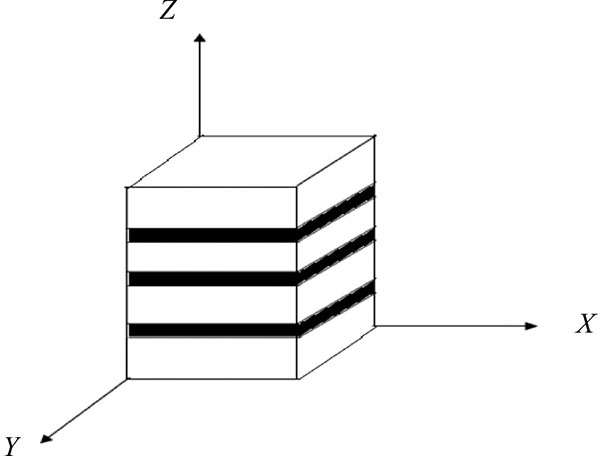 ). The dry samples of shale were cored along the X`Y`Z directions selectively. All cylindrical specimens with the height to diameter ratio of 2 (±0.03) were prepared by cutting and polishing. The triaxial stress experiments were carried out with the machine of RAW2000. The full stress-strain curves and fracture morphologies were obtained. The results of Z1-1 are shown in Fig. (2 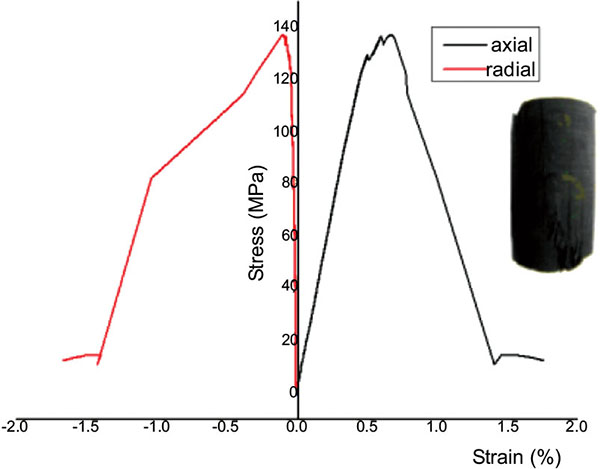 
According to the full stress-strain curves of each rock specimen, the elastic modulus, Poisson's ratio and compressive strength were calculated in X, Y, and Z directions. The results are shown in Table 1.

The results showed that the values of elastic parameters that are parallel to the bedding plane (along the X and Y direction) were close, and which had large differences from the vertical to bedding plane (Z direction). The vertical values were significantly higher than the parallel values. The rock presents the feature of transversely isotropic.

The geologists of Heim and Swiss assumed that the vertical geosterss is caused by overlying formation gravity [1Z.M. Li, and J.Z. Zhang, In-stiu Stress and Petroleum Exploration and Development, Petroleum Industry Press: China, 1997.]. The value changes with the formation density and depth. Therefore, the vertical geosterss can be calculated by density log information.

The actual formation density varies with the depth, which is difficult to use a simple function to represent. According to the density logs, the average density of a hole section can be obtained. So it can be calculated by the method of subsection summation.

The horizontal bedding shale can be seen as transversely isotropic material, and the constitutive equation can be expressed as:

Generally, three directions X, Y, Z are the main stress directions and the vertical stress is the overburden pressure. According to the constitutive equation, the effective stresses of two horizontal directions can be derived as:

, the horizontal geosterss calculation model can be written as:

Due to the fragile nature of the shale rock, the calculation model is established to invert the horizontal bedding shale geostress by using the adjacent homogeneous formation. It was assumed that there is no relative displacement between the formations and the strains are constant in two horizontal directions in all formations in the process of deposition and the late tectonic movement. The constitutive model of the homogeneous isotropic formations is obtained as:

, the strain of the adjacent homogeneous formation can be gotten as:

and substituting the strain of the adjacent formations into the (5), the horizontal bedding shale geosterss can be calculated as:

4. THE DISCUSSION OF SENSITIVITY FACTORS AND INFLUENCE LAWS

With the elastic modulus and Poisson's ratio of the vertical bedding direction increased, the in-stiu stress of two horizontal directions increased linearly as shown in Fig. (3a 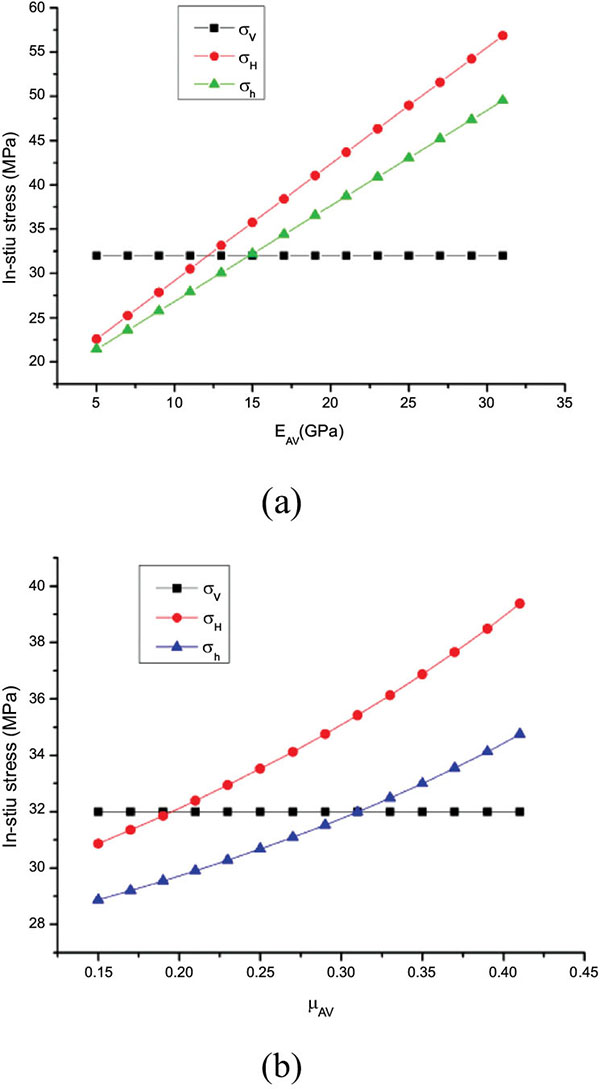 
With the increased elastic modulus of parallel vertical bedding direction, the in-situ stress of two horizontal directions was decreasing exponentially and the decrease rate of the minimum horizontal geostress was bigger, as shown in Fig. (4a 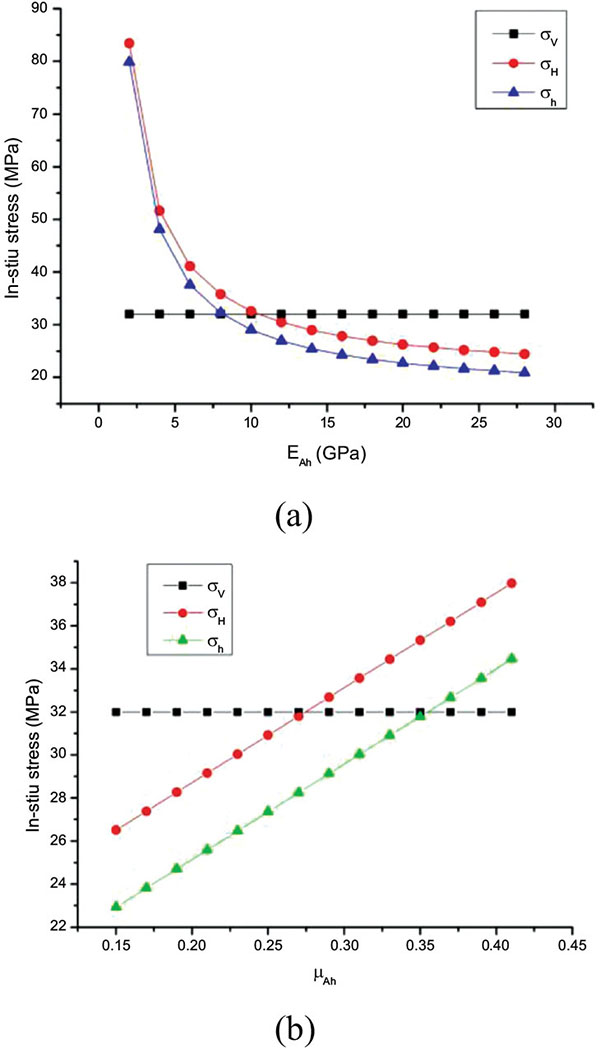 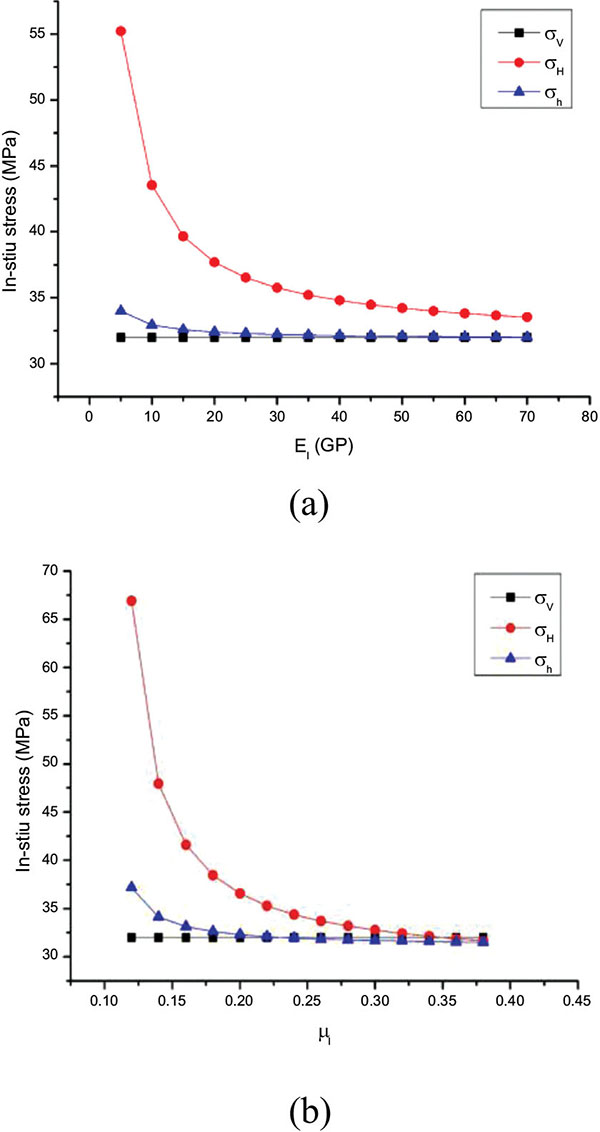 ). The main reason was that, the adjacent formation had stronger ability to resist deformation and bear more tectonic stress.

When using the new method to predict the shale geostress by the adjacent homogeneous formation, the following procedures should be obeyed.

Based on the above procedures, the shale geostress of Liaohe Oilfield was calculated. Firstly, the sandstones adjacent with the shale were cored and the DSA experiment was carried out. The DSA experimental apparatus and rock specimens are shown in Fig. (6 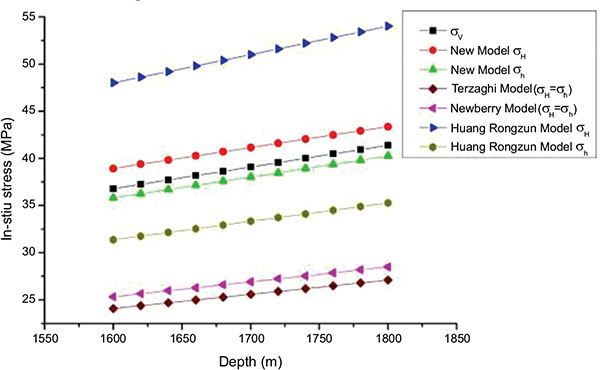 
Without considering the influence of tectonic stress, the calculation result of geostress by Terzaghi and Newberry model was lower. In the Huang Rongzun model, only considering the effect of Poisson's ratio, it was concluded that the maximum horizontal geostress value was larger and the minimum horizontal geostress value was smaller without the effect of elastic modulus. The new model considered the influence of Poisson's ratio and elastic modulus simultaneously. Thus, the calculation results were in the range of the results of Huang Rongzun model.

The research was supported by NSFC (Natural Science Foundation of China, No. 51504067 and No.51490650) and Postdoctoral foundation of Heilongjiang Province (No.LBH-Z15031) in the context of Northeast Petroleum University.