This paper firtstly investigated the stress sensitivity characteristics and the effect of stress-sensitive permeability on a tight reservoir. Decline-type curves that consider stress-sensitive permeability are then established, and a systematic analysis method was built for the production analysis to obtain the single-well controlled dynamic reserves and reservoir physical properties.

A field analysis was performed in combination with Block Yuan-284 of Changqing Oilfield. Results show that with the reduction of reservoir pressure, stress sensitivity leads to the decline in reservoir permeability and the increase in seepage resistance, thus reducing the actual single-well controlled reserve and radius.

By utilizing the analysis method based on the decline curves, we can effectively predict the single-well controlled dynamic reserves of such reservoirs and evaluate the characteristic parameters of reservoirs.

The current production analysis methods do not consider the effect of stress sensitivity, and thus their calculation results produce a large deviation. This article brings stress-sensitive permeability into decline-type curves to obtain a more accurate production analysis, including single-well controlled dynamic reserves, to make the calculation result correspond with the actual situation of reservoir, and to effectively guide the development of stress-sensitive oil–gas reservoirs.

Pore pressure reduces constantly in the production of oil and gas, and thus effective stress increases accordingly. The corresponding relation is expressed in the following equation [14V.M. Dobynin, "Effect of overburden pressure on some properties of sandstones", SPE Journal, vol. 2, no. 4, pp. 360-366, 1962.
[http://dx.doi.org/10.2118/461-PA] ]:

where S is the total stress, σ is the effective stress (matrix stress and pressure between particles), a is the stress sensitivity correction coefficient, and is the fluid pressure or pore pressure.

Formula 1 shows that under the condition of unchanged total stress, the change in fluid pressure leads to the change in effective stress, which will correspondingly result in the change in rock physical property.

A permeability stress sensitivity experiment was conducted for the ultra-low permeability sandstone from Block Yuan-284 of Changqing Oilfield. The core belongs to the Triassic Chang-6 Reservoir Group of Ordos Basin. The main fragment component of the sandstone is feldspar lithic sandstone, which is fine-medium grain and very fine-fine grain. The stress sensitivity characteristics of sandstone were analyzed in the research area. The confining pressure was maintained, and the displacement pressure was changed to simulate the process in which the formation rock was compressed during exploitation. The stress sensitivity experiment was conducted using eight cores. Fig. (1 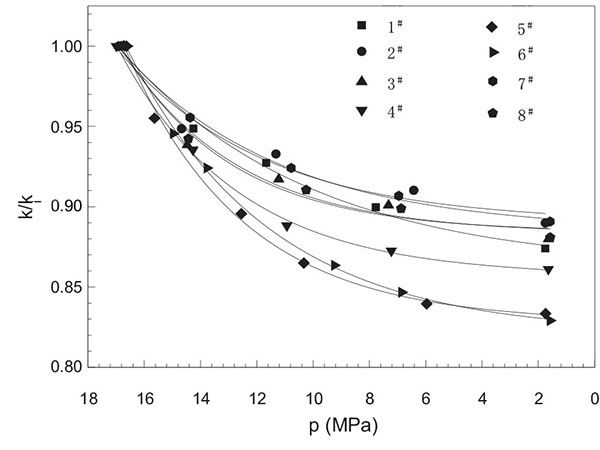 ) also illustrates the experiment results. We can fit the results with the exponential law curves in which the fitting compliance degrees are all above 0.9.

Assuming the presence of a vertical well with a circular reservoir (Fig. 2 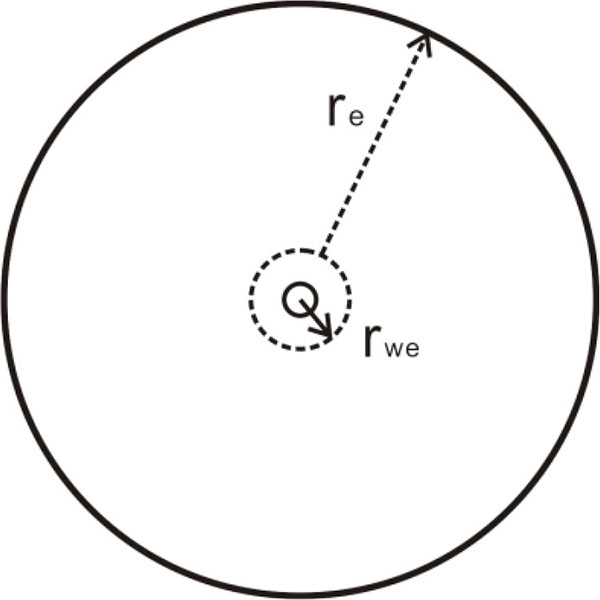 ), the formation and the fluid satisfy the following conditions:

The basic flow equation of a homogeneous reservoir is

When the permeability’s change in pressure follows an exponential law, the permeability modulus is effective in characterizing the permeability variation law. The relation of permeability change with effective stress can be expressed as follows [20O.A. Pedrosa, "Pressure transient response in stress-sensitive formations", Proceeding of SPE California Regional Meeting, , 1986
[http://dx.doi.org/10.2118/15115-MS] ]:

where γ is the permeability modulus of 1 MPa.

The integral for Equation (3) is

where ki is the reservoir permeability under the original formation pressure, mD.

Equation (4) is the expression of the exponential change law of permeability with pressure.

The above formula is the basic percolation differential equation of a tight sandstone reservoir that considers the stress-sensitive effect of permeability. The following dimensionless variables are introduced:

The following dimensionless permeability modulus is defined as:

According to flow mechanics theory, the mathematical model of a homogeneous closed reservoir that considers stress sensitivity can be established.

The flow control equation is:

The initial conditions are expressed as:

The internal boundary are expressed as:

The external boundary conditions are expressed as:

To calculate the above model, we used the perturbation technique for calculation and introduced the transformation relation as follows:

The following perturbation techniques are applied as follows:

Given the small dimensionless permeability modulus, the zero-order perturbation solution is used. Thus, Equations (10–14) are expressed as follows:

By conducting the Laplace transform for Equation (20), its Laplace spatial solution can be obtainedas:

In the above functions, KO and K1 are a zero-order and a first-order modified Bessel function, respectively, g is the Laplace Variable, L-1 is the Laplace inverse transform, and O(γD), ηwD is the allowance above zero-order solution.

The decline-type curve dimensionless production and time are defined as follows:

The auxiliary drawing function generally includes the dimensionless production integral and its derivative proposed by McCray. It is introduced for practical application and is conducive to improving the efficiency and accuracy of field engineers to explain and analyze production data. In actual use, the method of fitting three groups of data simultaneously is generally adopted to obtain the best fitting effect.

The following is the dimensionless production integral:

The following is the dimensionless production integral derivative:

tDd on the log-log plot, decline-type curves for vertical wells in homogeneous reservoirs of stress-sensitive reservoir are formed. 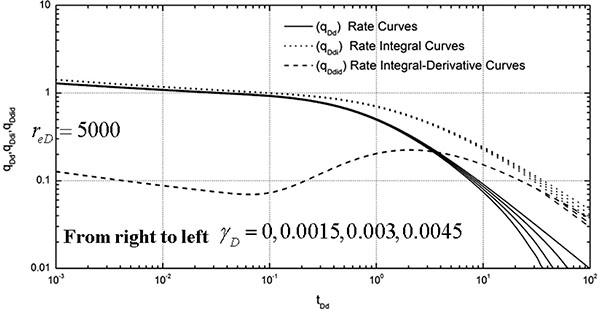 ) presents the decline-type curve under different dimensionless permeability moduli γD when the dimensionless reservoir radius reD is 5000, and the values of γD are 0, 0.0015, 0.003, and 0.0045 respectively. The difference between curves in the unsteady stage in the figure is small, and it is mainly in the pseudo steady stage. The curves are shown when γD is 0, 0.0015, 0.003, and 0.0045 from right to left. 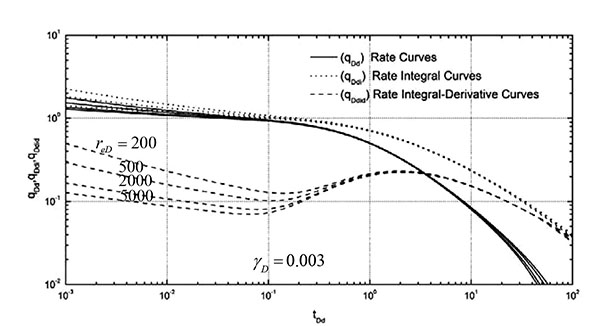 ) summarize the following basic laws of the decline-type curves for vertical wells in stress-sensitive reservoirs:

An instance analysis was conducted by selecting a well in Block Yuan 284 that belongs to Ordos Basin. Block Yuan 284’s purpose of horizon is the Chang-6 formation. The effective thickness of this well was 10.94 m, with porosity being 0.13, irreducible water saturation being 43%, and well radius being 0.1 m. Its production history is illustrated in Fig. (5 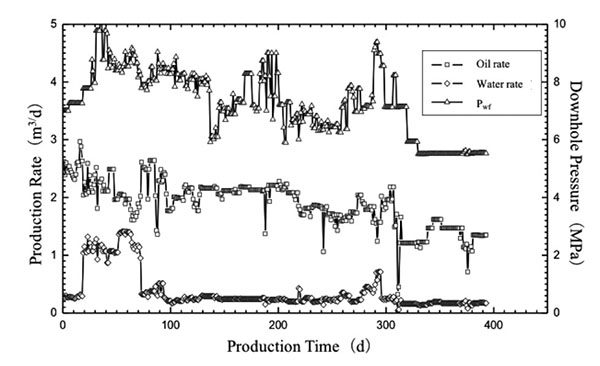 ). The history of this well was studied first. No other operation measures wereadopted after the fracturing production of this well. Its production and pressure data were monitored daily that are representative of relatively high accuracy and good correlation (Fig. 5

). The water injection enhancement productivity effect was poor, pressure and production declined with time, and the oil well remained at the depletion development state.

This well does not undergo unstable pressure testing after being put into production. Therefore, we mainly used its production data to judge the model as shown in Fig. (6 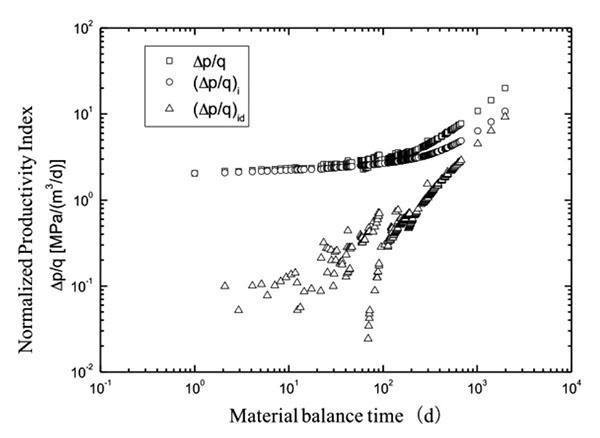 The basic model characteristics are as follows:

The calculated normalized production, production integral, and its derivative are defined as follows: 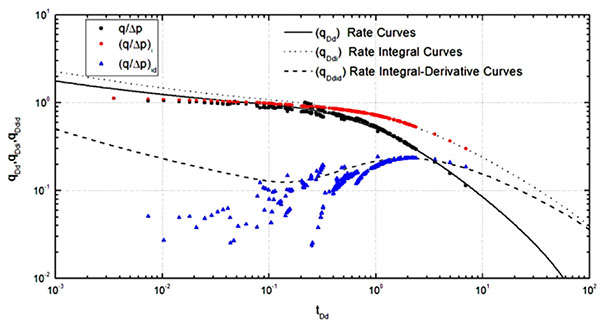 
The following fitting parameters can be obtained through fitting:

The typical curve analysis and calculation result are as follows: 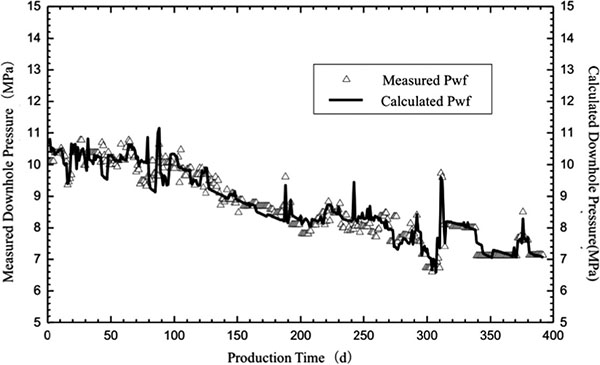 ) indicates that the fitting degree is high, and thus the adopted model and parameters have high credibility and can correctly reflect the actual status of the oil well.