Characterization of Alternanthera mosaic virus and its Coat Protein

A new isolate of Alternantheramosaic virus (AltMV-MU) was purified from Portulaca grandiflora plants. It has been shown that the AltMV-MU coat protein (CP) can be efficiently reassembled in vitro under different conditions into helical RNA-free virus-like particles (VLPs) antigenically related to native virus. The AltMV-MU and VLPs were examined by atomic force and transmission electron microscopies. The encapsidated AltMV-MU RNA is nontranslatable in vitro. However, it can be translationally activated by CP phosphorylation or by binding to the TGB1protein from the virus-coded movement triple gene block.

Viral RNA was isolated from the purified viral particles by phenol deproteinization. The method of salt deproteinization with 2M LiCl described for PVX CP [7Homer RB, Goodman RM. Circular dichroism and fluorescence studies on potato virus X and its structural components Biochim Biophys Acta 1975; 378: 296-304.] was used to obtain the AltMV CP preparation. The extinction coefficient of 0.7 for AltMV CP was calculated (http://us.expasy.org/tools/protparam.html).

A single protein band with apparent size of 22 kDa was observed when dissociated virions and purified CP preparations were analyzed by 8-20% SDS-PAGE and Western blot (Fig. 1 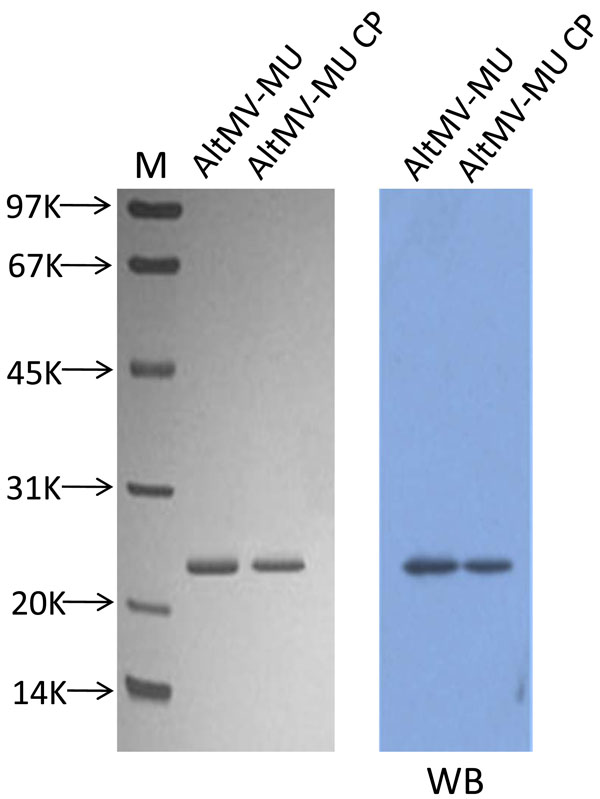 ). The Mr of the protein deduced from the amino acid sequence was 22, 1 x 103 which was close to the value determined by SDS-PAGE.

According to the TEM data, the mean length and diameter of AltMV-MU virion were 570 nm and 13 nm, respectively (Fig. 2a

We found that similarly to PapMV CP, AltMV-MU CP could be assembled in vitro into VLPs at pH 4.0 and low ionic strength. In 0.01M citrate buffer, pH 4.0 a considerable part of AltMV-MU VLPs stuck together producing long bundles (Fig. 2c

). However, in contrast to PapMV, TEM and AFM analyses showed that AltMV-MU CP formed filamentous VLPs at pH 8.0 as well (Fig. 2e

Apparently, the assembly of AltMV-MU CP into VLPs was less dependent on pH than that of PapMV. Therefore, the conditions of assembly and the size of the products formed from AltMV-MU and PapMV CPs were considerably different [10Erickson JW, Bancroft JB, Horne RW. The assembly of papaya mosaic virus protein Virology 1976; 72: 514-7.].

Antigenic specificity of AltMV-MU virions was compared with that of RNA-free VLPs assembled from AltMV-MU CP at pH 4.0. Antisera against AltMV-MU virions and VLPs have been obtained using a purified native virus preparation and a preparation of VLPs assembled at the pH 4.0 as antigens. Antigenic properties of AltMV-MU and VLPs were compared by indirect ELISA [11Clark MF, Adams AN. Characteristics of the microplate method of enzyme-linked immunosorbent assay for the detection of plant viruses J Gen Virol 1977; 34: 475-83.]. Purified preparations of native AltMV-MU and VLPs, both diluted with PBS pH 7.4 up to the concentration of 5 µg/ml, were applied to the wells of MaxiSorp microplate (Nunc) and adsorbed at 4°C overnight. Mouse antisera to AltMV-MU and VLPs as well as non-immune mouse serum used as a negative control were titrated against each antigen. Horseradish peroxidase-labelled anti-mouse IgG W402 (Promega) was used as detection antibodies.

Mouse antiserum to native AltMV-MU recognized the homologous antigen and some VLPs antigenic determinants which presumably are common for both structures but differently exposed on the VLPs and the native virus (Fig. 3a

). Similarly, mouse antiserum to VLPs strongly reacted with VLPs and also with native AltMV-MU even though the reaction with the virus was clearly weaker (Fig. 3b

). These data indicate that native AltMV-MU and VLPs are antigenically related, but not identical. This was not surprisingly because native virus particles (Fig. 2b

) looked quite different morphologically suggesting some differences in their antigenic properties. In particular, some CP epitopes exposed at the surface of native virus particle, could be found hidden or disrupted at the VLPs assembly. On the other side, the neotope appearance cannot be ruled out at the VLPs formation.

). Both antisera to PVX and PAMV have been found to react with the AltMV-MU (Fig. 3c

, lanes 1, 6). At the same time, the antiserum to AltMV-MU reacted neither with PVX nor with PAMV (Fig. 3c

, lanes 4, 5). Phylogenetic analysis of 26 coat protein sequences from genus Potexvirus was performed previously [5Ivanov PA, Mukhamedzhanova AA, Smirnov AA, Rodionova NP, Karpova OV, Atabekov JG. The complete nucleotide sequence of Alternanthera mosaic virus infecting Portulaca grandi?ora represents a new strain distinct from phlox isolates Virus Genes 2011; 42: 268-71.]. It shows that all three proteins are distanly located from each other within the appropriate tree that might explain the absence of cross-reactivity in case of antiserum to AltMV-MU.

, lane 2) but could be activated by CP phosphorylation of the AltMV-MU virions by protein kinase C (PKC) (Fig. 4a

A similar effect could be reached as a result of interaction of virions with AltMV-MU TGB1. The AltMV-MU TGB1 with N-terminal thioredoxin (Trx-tag), S-tag and His-tag was expressed in E. coli BL21 (DE3) strain using the pET 32(a)+ vector according to a Novagen protocol (Novagen pET System Manual, 11th Edition). The fusion protein with His-tag was purified using Ni-NTA affinity resin (Qiagen) and then specifically digested with enterokinase (Novagen, Tag-off rEK Cleavage/Capture Kit) to remove the Trx-tag, S-tag and His-tag. The data presented at Fig. (4a

) lane 4 showed that putative TGB1-CP AltMV-MU interaction resulted in translation of encapsidated genome RNA in vitro. This interaction was confirmed by Far-western blot analysis (Fig. 4b

). It could be presumed that two ways of translational activation of encapsidated RNA are peculiar features of some other members of genus Potexvirus.

We are grateful to Dr. Stephan Winter (German Collection of Microorganisms and Cell Cultures, Braunschweig) for providing the initial portulaca isolate and Dr Sergey Saunin and Mikhail Savvateev (AIST-NT Company) for Atomic force microscopy assays. This work was funded in part by the Russian Foundation for Basic Research (Grant No. 10-04-000-89-a) and the Federal Agency of Science and Innovation (FASI) (contracts No 16.512.11.2184).