During the spring of 2009, a new influenza A (H1N1) virus of swine origin emerged and spread worldwide causing a pandemic influenza. Here, 329 naso-pharyngeal swabs collected from patients with flu-like symptoms were analyzed by real-time PCR for the presence of H1N1 2009 pandemic virus. Twenty-five samples collected from immunocompetent and immunodepressed patients contained the H1N1 pandemic virus. Phylogenetic analysis of the hemagglutinin and neuraminidase genes showed no obvious differences in terms of similarity and/or homology between the sequences identified in immunocompetent individuals and those obtained from immunocompromised patients. Pre-existing clinical conditions may influence the outcome of H1N1 disease.

In the early spring of 2009, Mexico and the United States reported clusters of human pneumonia cases caused by a novel H1N1 influenza A virus. This virus spread subsequently across the globe at an unprecedented rate, prompting the WHO to declare a pandemic in June 2009. Phylogenetic analysis has inferred that the virus is likely a reassortant between a North American triple-reassortant swine H1N1 or H1N2 virus and a Eurasian lineage H1N1 swine influenza virus [1Dawood FS, Jain S, Finelli L, et al. Novel Swine-Origin Influenza A (H1N1) Virus Investigation Team, Emergence of a novel swine-origin influenza A (H1N1) virus in humans N Engl J Med 2009; 360: 2605-15., 2Garten RJ, Davis CT, Russell CA, et al. Antigenic and genetic characteristics of swine-origin 2009 (H1N1) influenza viruses circulating in humans Science 2009; 325: 197-201.]. The analysis showed that the H1 of this reassortant originated from American pigs, while NA and MP were more likely from European pigs. All of the 2009 isolates appear homogeneous and cluster together, although they are distinct from classical human A (H1N1) viruses [3Babakir-Mina M, Dimonte S, Perno CF, Ciotti M. Origin of the 2009 Mexico influenza virus: a comparative phylogenetic analysis of the principal external antigens and matrix protein Arch Virol 2009; 154: 1349-52.]. Bayesian molecular-clock analysis of each gene of this novel H1N1 virus [4Smith GJD, Vijaykrishna D, Bahl J, et al. Origins and evolutionary genomics of the 2009 swine-origin H1N1 influenza an epidemic Nature 2009; 459: 1122-5.] concluded that the mean evolutionary rate is typical of that of swine influenza viruses, but that the duration of unsampled diversity for each gene segment had means that ranged from 9.24 to 17.15 years, suggesting that the proposed ancestors of this virus may have been circulating undetected for nearly a decade. Inadequate surveillance and characterization of influenza A viruses that circulate in swine have been blamed for this evolutionary gap. Also a recent study showed that the domestic birds could act as intermediate hosts of H1N1 reassortants [5Babakir-Mina M, Dimonte S, Ciccozzi M, Perno CF, Ciotti M. The novel swine-origin H1N1 influenza A virus riddle: Is it a domestic bird H1N1-derived virus? New Microbiol 2010; 33: 77-81.]. Multiple genetic groups have been recognized, including one recently predominant lineage [6Valli MB, Meschi S, Selleri M, et al. Evolutionary pattern of pandemic influenza (H1N1) 2009 virus in the late phases of the 2009 pandemic PLoS Curr Influenza 2010; 3: RRN1149.], but any possible clinical importance of different lineages remains uncertain. To date, reassortment has not occurred with human influenza viruses. The level of pulmonary replication of the 2009 H1N1 virus has been higher than that of seasonal influenza A (H1N1) viruses in animals infected experimentally [7Maines TR, Jayaraman A, Belser JA, et al. Transmission and pathogenesis of swine-origin 2009 A (H1N1) influenza viruses in ferrets and mice Science 2009; 325: 484-7.-9Munster VJ, De Wit E, Van den Brand JM, et al. Pathogenesis and transmission of swine-origin 2009 A(H1N1) influenza virus in ferrets Science 2009; 325: 481-3.], but the 2009 pandemicstrain generally lacks mutations that are associated with increased pathogenicity in other influenza viruses [10Padlan EA. The pandemic 2009 (H1N1) swine influenza virus is mild compared to the pandemic 1918 (H1N1) virus because of a proline-to-serine substitution in the receptor-binding site of its hemagglutinin - a hypothesis Med Hypotheses 2010; 74: 240-1.].

Here, a phylogenetic study was carried out on the H1N1 2009 pandemic viruses isolated from immunocompetent and immunocompromised patients admitted at Tor Vergata hospital for flu-like symptoms. Influenza-like illness was defined as the presence of fever >38º C and at least another constitutional symptom (asthenia, headache, malaise, sweating, and chills) and one respiratory symptom (cough, sore throat, nasal congestion).

From September 2009 through March 2010, 329 naso-pharyngeal swabs were collected from patients (127 females and 202 males) admitted at the Polyclinic Tor Vergata for flu-like symptoms. Patient’s age ranged from 1 to 93 years old. The specimens were analysed at the Laboratory of Molecular Virology, Foundation Polyclinic Tor Vergata, Rome, Italy, for the presence of influenza viruses type A and B.

Viral RNA was extracted with the QIAamp RNA mini kit according to the manufacturer’s instruction (QIAGEN S.P.A., Milan, Italy). The RNA was eluted in a volume of 60 µl and stored at 80°- C until analysis. The influenza virus was detected by qualitative real-time PCR using the Influenza virus A/B assay (Cepheid, Sunnyvalle, CA, USA) run on the SmartCycler platform (Cepheid, Sunnyvalle, CA, USA). Influenza A positive cases were re-amplified with primers targeting the hemaglutinin (HA) and neuraminidase (NA) genes of influenza A (H1N1) 2009 pandemic virus. The primer sequences were as follows: F-HA 5’- TGGGGCCATTGCCGGTTTCA-3’ (nucleotide position 1041-1060) and R-HA 5’TGCCCCCAGGGAGACTACCA -3’ (nucleotide position 1647–1628); F-NA 5’-GCCCAGACAAT GGGGCAGTGG-3’ (nucleotide position 590-610) and R-NA 5’-CCGTCTGGCCAAGACCAACCC-3’ (nucleotide position 1379-1359). Reverse-transcription and amplification was carried out using the OneStep RT-PCR Kit according to the manufacturer’s instructions (QIAGEN S S.P.A., Milan, Italy).

The PCR products were analyzed on a 2% agarose gel stained with ethidium bromide and visualized under ultraviolet light. All the necessary precautions were taken to avoid contamination.

Twenty-five H1N1 2009 pandemic viruses were identified. Of these, six were from immunodepressed patients (five with hematological malignancies and one HIV-1 infected) and nineteen from immunocompetent individuals (Table 1). A Maximum Likelihood phylogenetic tree was generated for the HA and NA genes (Figs. 1 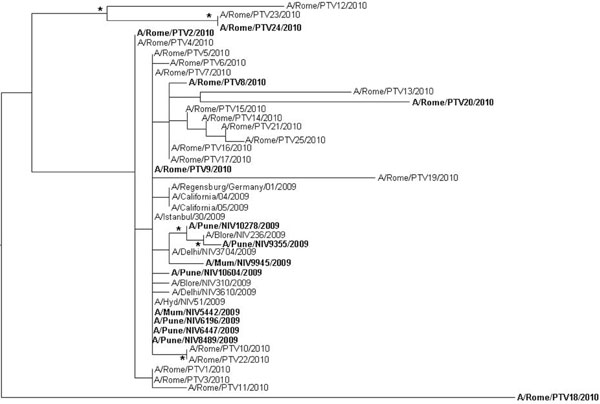 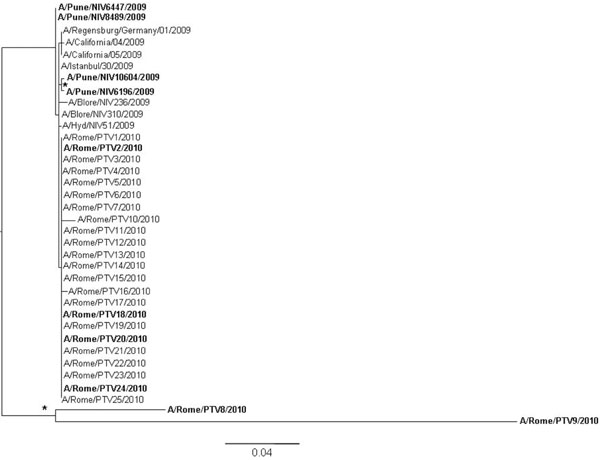 ). In the HA tree, a main clade was generated where the strains collected from Italian immunodepressed patients and Indian fatal cases [15Potdar VA, Chadha MS, Jadhav SM, et al. Genetic characterization of the Influenza A pandemic (H1N1) 2009 virus isolates from India PLoS ONE 2010; 5: e9693.] (in bold) intermixed with those obtained from immunocompetent Italian patients or Indian recovered cases (regular font). This is clearly shown by the strains A/Pune/NIV10278/2009 and A/Pune/NIV9355/2009 obtained from two fatal cases which cluster with the strain A/Blore/NIV236/2009 isolated from a recovered patient; and outside the main clade, by the strain A/Rome/PTV24/2010 isolated from an immunocompromised patient which clusters with the strain A/Rome/PTV12/2010 and A/Rome/PTV23/2010 obtained from immunocompetent individuals. Both clusters are statistically supported. A similar picture was observed with the NA tree (Fig. 2

). Even in this case the viral strains from immunocompromised or death patients intermixed with those isolated from immucompetent patients with the exception of two small clusters (A/Pune/NIV10604/2009, A/Pune/NIV6196/ 2009 and A/Rome/PTV8/2010, A/Rome/PTV9/2010) which were collected from two fatal cases and immunocompromised patients, respectively.


The results of this study indicate no obvious differences in viral sequences between the H1N1 pandemic viruses isolated from immunocompetent individuals and those identified in recovered immunocompromised patients and/or fatal cases. We can exclude that the lack of sequence variations observed in Italian immunocompetent and immunocompromised patients was due to contamination of virus sequences since the samples and sequencing were handled appropriately using separate rooms and including controls in each run as also shown by the phylogenetic trees.