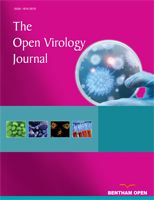 Genetic Characterization of HIV-1 Strains Among the Injecting Drug Users in Nagaland, India

Global HIV-1 surveillance has led to the detection of its new recombinant forms. This study was carried out for the first time to elucidate the genetic characterization and evolutionary relationship of HIV-1 strains among injecting drug users of Nagaland, northeastern India. A total of 156 injecting drug users participated in this study voluntarily. Among them 18 were seropositive for HIV-1 (11.5%).

The Heteroduplex Mobility Assay (HMA) of HIV-1 based on p24-p7 region of gag gene and C2-V3 region of env gene revealed 11 samples to be subtype C (gag/env), 1 sample as subtype B (gag/env) and 6 samples to be recombinants between subtype C and B. Also, the sequencing and phylogenetic analysis of gag (p24-p7) and env (C2-V3) genes from eighteen samples of Nagaland IDUs with different global HIV-1 strains showed the presence of Indian, African, Thai and their recombinant forms. However, more recombinant strains based on different genomic regions of HIV-1 were detected using Multiregional Hybridization Assay (MHA) where 8 out of 18 samples were found to be recombinants between subtype C and B. Thus, multiregional hybridization assay along with heteroduplex mobility assay can serve as an efficient tool in the characterization of recombination pattern among the newly emerging HIV-1 recombinants.

open-access license: This is an open access article distributed under the terms of the Creative Commons Attribution Non-Commercial License (http: //creativecommons.org/licenses/by-nc/3.0/) which permits unrestricted, non-commercial use, distribution and reproduction in any medium, provided the work is properly cited.

It was a community based cross-sectional study. Male IDUs of ages 31- 40 years were contacted through secondary informant method followed by snowballing. All IDUs were explained about the purpose of this study and requested to participate voluntarily. Experienced social workers interviewed them to study their demography, risk behavior and risk perception using a field tested questionnaire. Interview was followed by collection of about 5 ml blood in vacationer containing EDTA. HIV was tested by enzyme linked immunosorbent assay (Immunogenetics, Belgium) followed by tridot assay (Standard Diagnostics, Bioline, Korea). Peripheral blood mononuclear cells were separated from the whole blood by Ficoll-Hypaque gradient centrifugation [7Boyam A. Separation of leucocytes from blood and bone marrow Scand J Clin Lab Invest 1968; 21: 77-81.]. DNA was extracted by using the QIAamp DNA Blood Mini Kit 250 (QIAGEN, Germany, Hilden) according to the manufacturer’s protocol.

The HIV-1 strains were subjected to gag and env Heteroduplex Mobility Assay as described earlier [5Bhanja P, Sengupta S, Singh NY, Sarkar K, Bhattacharya SK, Chakrabarti S. Determination of gag and env subtypes of HIV-1 detected among injecting drug users in Manipur, India: Evidence for intersubtype recombination Virus Res 2005; 114: 149-53., 8Heyndrix L, Janssens W, Zekeng L, et al. Simplified strategy for detection of recombinant HIV-1 group M isolates by gag/ env heteroduplex mobility assay J Virol 2000; 74: 363-70.]. Briefly, the amplicons (460bp, 500bp) for gag (p24-p7) and env (C2-V3) were amplified through nested PCR using standard primers (NIH AIDS Research and Reference Reagent Program, NIH, USA). For gag HMA, 4.5μl of the amplicon of the unknown sample was mixed with 4.5μl of the reference amplicon in presence of 1μl of 10x annealing buffer (1M NaCl, 100Mm Tris-HCl [pH 7.8], 20Mm EDTA). For env HMA, 5μl of the amplicon was mixed with 5μl of the reference amplicon in the presence of 1.1μl of 10x annealing buffer. It was then denatured at 94°C for 2 minutes followed by renaturation by snap freezing in ice to form Heteroduplex molecules. The mixture were then loaded on a 5% Polyacrylamide Gel (for gag-HMA, 5% Polyacrylamide / 20% Urea; 5% polyacrylamide for env) in 1X TBE buffer and electrophoresed at 250 V for 2 hours 30 minutes. Based on the relative mobility of the heteroduplex molecules towards homoduplexes, subtypes were assigned. Heteroduplex molecules formed between the unknown sample and the most closely related subtype exhibited the fastest mobility. 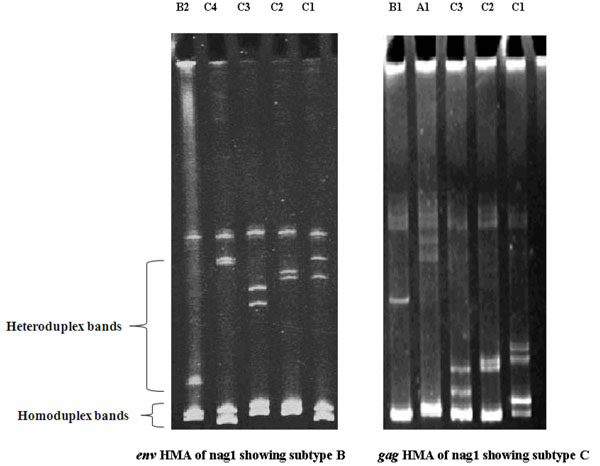 Different Genotypic Categories of HIV-1 Strains Among IDUs of Nagaland 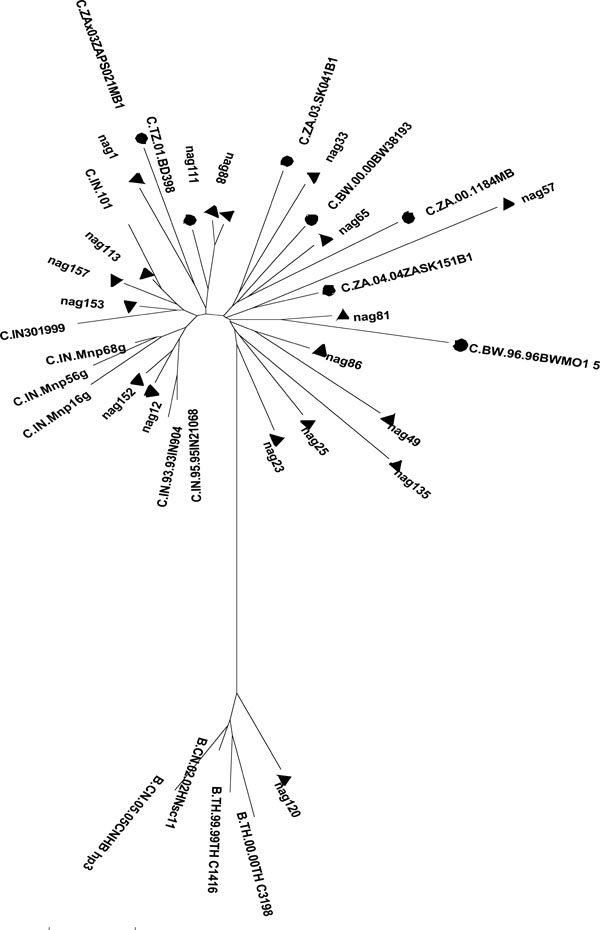 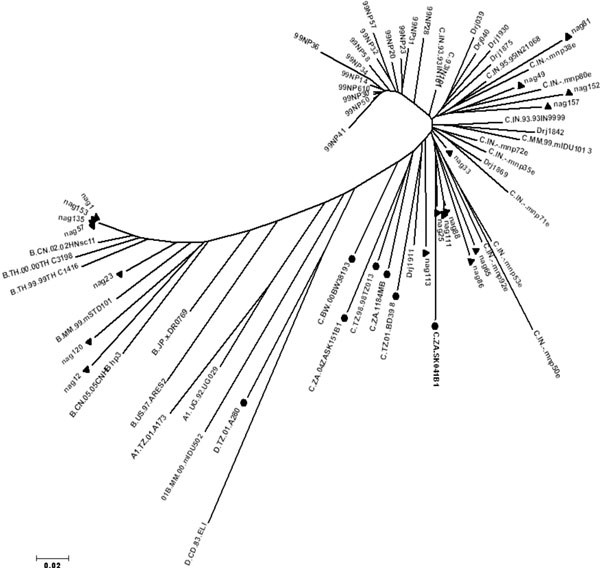 Due to its geographical proximity with the golden triangle, Manipur and the adjoining states of Nagaland have made the north-eastern region vulnerable to HIV infection [1Sarkar S, Mookerjee P, Roy A, et al. Descriptive epidemiology of intravenous heroin users- a new risk group for transmission of HIV in India J Infect 1991; 23: 201-7., 2Weniger BG, Takebe Y, Ou CY, Yamazaki S. The molecular epidemiology of HIV in Asia AIDS 1994; 8: 13-28.]. Rampant injecting practices have contributed to making these areas as the main abode for HIV. Sharing of injecting equipments frequently occurs among injecting drug users and drug traders as a part of their drug-purchasing behavior, thereby, leading to a possibility of introduction of different HIV- 1 subtypes into circulation. Similar observations have been found in studies from China where HIV epidemic due to different subtypes has been spreading along heroin trafficking routes [11Piyasirisilp S, McCutchan FE, Carr JK, et al. A Recent Outbreak of Human Immunodeficiency Virus Type 1 Infection in Southern China Was Initiated by Two Highly Homogeneous, Geographically Separated Strains, Circulating Recombinant Form AE and a Novel BC Recombinant J Virol 2000; 74: 11286-95.]. Genetic diversity of HIV-1 might also be related to cross-border migration and sharing practices of IDUs of different ethnicity (host factor). The IDUs who had sexual relationship with other IDUs were especially at the brink of acquiring HIV infection. These findings suggest that an IDU having these risk behaviors has multiple chances of getting exposed to different circulating subtypes of HIV-1 thereby facilitating the development of novel recombinant strains. Various other studies have documented the rapid spread of recombinant strains of HIV among IDUs due to unsafe injecting practices [12Kalish ML, Baldwin A, Raktham S, et al. The evolving molecular epidemiology of HIV-1 envelope subtypes in injecting drug users in Bangkok, Thailand: implications for HIV vaccine trials AIDS 1995; 9: 851-7.-14Liitsola K, Tashkinova I, Laukkanen T, et al. HIV-1 genetic subtype A/B recombinant strain causing an explosive epidemic in injecting drug users in Kaliningrad AIDS 1998; 12: 1907-.].

The sequencing and phylogenetic analyses of gag and env genes in this study clearly indicate that the HIV-1 strains from Africa are in circulation along with Indian strains. The introduction of African HIV-1 strains might have occurred in the past and had become stable in the northeastern IDU population. Though it is well known that the B/ C recombinants were evolved from recombination between subtype C and subtype B viruses due to dual infection, however, the recombination pattern in different genes of HIV-1 detected by multiregional hybridization assay, raises the possibility of recombination within recombinant strains and the generation of mosaic recombinant forms of HIV-1. The occurrence of Indian C (gag) /Thai-B (env), African C (gag)/ Thai-B (env), Indian C (gag)/ African C (env), African C (gag)/ Indian C (env) recombinant forms of HIV-1 among the injecting drug users of Nagaland brings about the possibility of incorporation of recombinant HIV-1 strains in Nagaland IDUs. This gives an alarming signal of increasing population with inter and intragenomic recombinant forms of HIV-1 which could lead to serious epidemic among injecting drug users of the north-eastern region. Multiregional hybridization assay along with heteroduplex mobility assay enabled us to scan the whole HIV-1 genome within a short period of time. In Multiregional Hybridization Assay, dual probe reactivity and failure of probe hybridization in a few cases could have been the outcome of genetic diversity of HIV-1 within the clade [9Kijak GH, Tovanabutra S, Sanders-Buell E, et al. Distinguishing molecular forms of HIV-1 in Asia with a high-throughput, fluorescent genotyping assay, MHAbce v.2 Virology 2007; 358: 178-91.]. The full length HIV-1 gene amplification of the samples with B/C recombination is in process to track the possibility of newly circulating recombinant forms among Nagaland injecting drug users. Moreover, it remains to be investigated whether recombination may confer selective advantage over parental viruses.

We sincerely acknowledge the cooperation of Nagaland State AIDS Control and Prevention in this study. We also thank the Dept. of Biotechnology, Govt. of India and Indian Council of Medical Research for financial support.