Building a large number of static models to analyze reservoir performance is vital in reservoir development planning. For the purpose of maximizing oil recovery, reservoir behavior must be modelled properly to predict its performance. This requires the study of the variation of the reservoir petrophysical properties as a function of spatial location.

In recent times, the method used to analyze reservoir behavior is the use of reservoir simulation. Hence, this study seeks to analyze the spatial distribution pattern of reservoir petrophysical properties such as porosity, permeability, thickness, saturation and ascertain its effect on cumulative oil production. Geostatistical techniques were used to distribute the petrophysical properties in building a 2D static model of the reservoir and construction of dynamic model to analyze reservoir performance. Vertical to horizontal permeability anisotropy ratio affects horizontal wells drilled in the 2D static reservoir. The performance of the horizontal wells appeared to be increasing steadily as kv/kh increases. At kv/kh value of 0.55, a higher cumulative oil production was observed compared to a kv/kh ratio of 0.4, 0.2, and 0.1. In addition, horizontal well length significantly affects cumulative oil production of the petroleum reservoir studied.

The geostatistical and reservoir simulation methods employed in this study will serve as an insight in analyzing horizontal well performance.

More importantly, the decision on how to increase oil recovery and maximize the profitability of field development projects is the focal point. Therefore, an extensive evaluation of certain decision variables such as production scheduling parameters, reservoir properties, well types, location to drill new wells and effective technique to obtain the best economic strategies are required. Also, consideration should be given to the spatial distribution of geological and rock properties such as porosity and permeability in order to locate potential hydrocarbon zones for drilling activities. This involves extensive analysis and critical evaluation of development strategies to produce the greatest amount of hydrocarbons within the expected economic limits. Several techniques have been adopted to achieve efficient reservoir development process which significantly affects the productivity and economic benefits of an oil reservoir. However, the purpose of this study is to analyze the spatial distribution pattern of reservoir petrophysical properties to evaluate horizontal well performance. In this study, spatial based modeling approaches and reservoir simulation were used as key evaluating factor for the development of the reservoir to improve its productivity.

The reservoir studied in this research synthetically named reservoir X is located in Plum Bush Greek Field, Washington County, Colorado. It has a geometry comparable to channel sand with a gently west dipping slope. The structure has a maximum elevation difference of approximately 60 ft with a thickness of approximately 40 ft to 50 ft. The average net-pay thickness is 20 ft. The compressibility of the formation is approximately 3.0 x 10-6 psi-1. At 9290ft reference depth, the initial oil and gas saturation are estimated to be Soi=77%, and Swi=23% respectively. At the reference depth of 9290 ft, initial formation pressure is measured to be 4800 psia. Reservoir X consists of poorly-to-well-sorted Cretaceous Dakota J sands. The reservoir sands depict excellent reservoir quality with permeability ranging from 250 mD to 300 mD. The average effective porosity of the reservoir is 22% [15T. Ertekin, J.H. Abou-Kassem, and G.R. King, Basic Applied Reservoir Simulation, Duke Engineering and Services Co.: Los Angeles, pp. 8-31.].

The data used for this research include: isoporosity map, isopermeability map, structure, and isopach maps of reservoir X. The maps were digitized and their corresponding coordinates were used to produce Digital Terrain Model (DTM) and contour map of top of sand structure of reservoir X as shown in Figs. (1 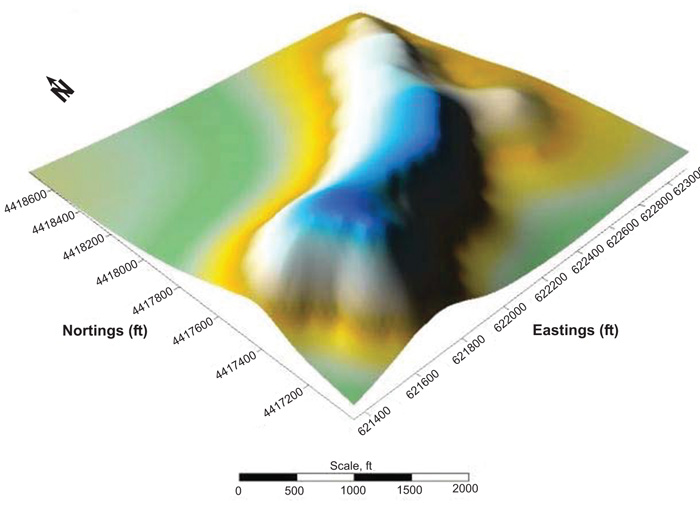 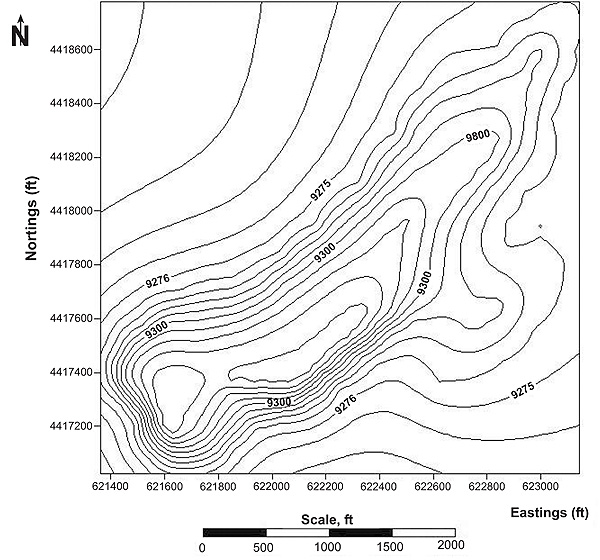 ). The permeability, porosity and thickness values obtained from the isopermeability, isoporosity, and isopach maps were used for the Geostatistical modeling.

The reservoir has an aerial extent of about 620 acres with the net thickness of about 40ft. The average effective porosity of the reservoir is 22%, with permeability ranging from 250mD to 300 mD.The maximum and minimum values of the X and Y coordinates of the properties location were used to estimate the region of stationarity as shown in Table 1.


Stanford Geostatistical Modeling Software (SGEMS), an open-source computer package for solving problems involving spatially related variables, was employed. Each reservoir property data set was estimated using variogram models, Ordinary Kriging (OK), Sequential Gaussian Simulation (SGS), and Sequential Indicator Simulation (SIS). Generally, anisotropic variograms were considered to adequately capture the spatial variation between the data points. The properties evaluated are permeability, porosity, and net thickness. These properties were evaluated in each of the eight layers within the reservoir. OK was used to estimate permeability, porosity, and thickness values at the unsampled location. SGS was carried out on porosity and thickness, while SIS was carried out on the permeability model with many realizations produced in each layer. Philips [14R. Philip, and B. Mark, Reservoir Modeling Design, Springer Dordrecht Heidelberg, Press: New York, pp. 36-103.] proposed that one realization is only one possible outcome, many realizations normally need to be simulated to assess variability and probability of occurrence.

In this study, porosity was modeled using SGS. Fig. (3 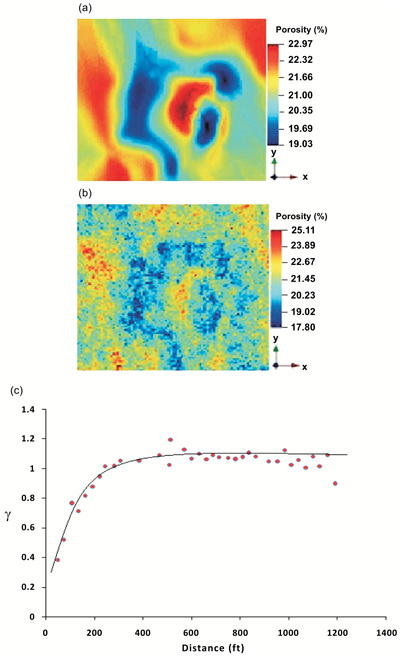 ) shows porosity distribution map generated with OK and SGS. The spatial variation in the porosity data points was well captured in one variogram direction. Variogram analysis was conducted on the porosity data set to subsequently aid in the generation of equiprobable realizations. Exponential model was used to fit the data set by visual inspection. The modeling input parameters are shown in Table 2.

Modeling of permeability was carried out using SIS. Fig. (4 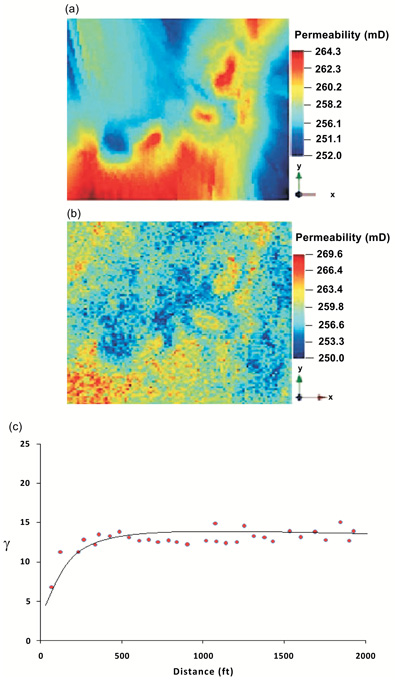 Modeling of net thickness was carried out using SGS. Fig. (5 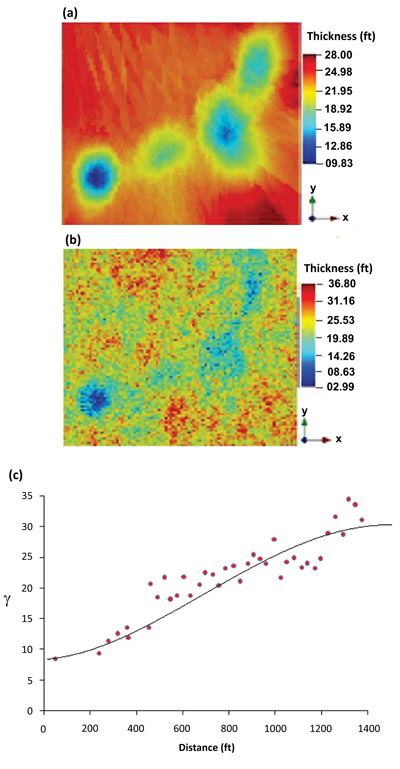 ) shows thickness distribution map generated from OK and SGS. The model shows lateral continuity from the southeast to the northwest corner of the grid block.

The phases present in reservoir X are water and oil. The model represents a 620 acre field (approximately 6000ft x 5400ft) with three production wells located in grid block 7:7:4, 2:3:6 and 9:4:5 respectively. In this study, 10 years’ production period was considered. Perforations were shut down as soon as water cut reaches 80%. Fig. (6 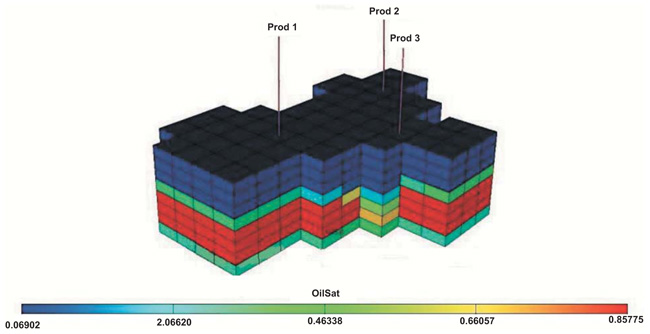 ) and Table 5 shows wells location in reservoir X and the initial fluids in place after the initialization run.

The porosity, permeability, and thickness generated were used to populate the reservoir model. The simulation grid and various rock properties in each grid cell were specified in the grid section. From these properties, the pore volumes of the grid blocks and the inter-block transmissibilities were estimated by the simulator. The average effective porosity is 22% and permeability ranges from 250mD to 300 mD. Fig. (7 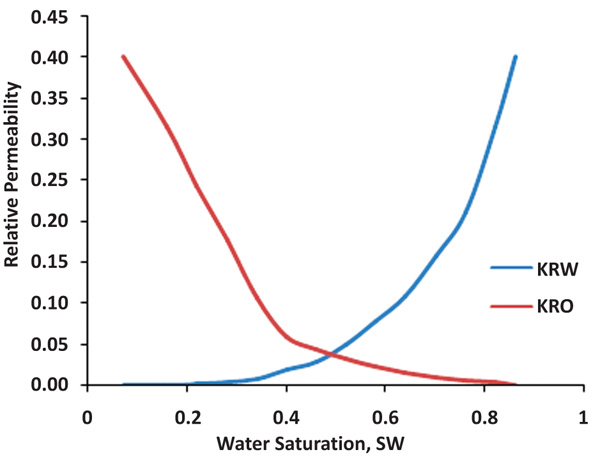 ) shows the relative permeability curve used while a summary of the reservoir properties are shown in Table 6.

The reservoir is strongly supported by an aquifer and the invading water helps to move the oil to the producing wells. The pressure within the reservoir is uniformly distributed and it ranges from 2992.9 psia to 3009.3 psia. Fig. (8

) shows the spatial distribution map of field pressure and saturation.

In this research, well performance evaluation was considered to be a key factor in the reservoir development plan with the purpose of maximizing oil recovery. In respect of this, certain reservoir and well parameters such as vertical to horizontal permeability anisotropy (kv/kh) and horizontal well length were analyzed to ascertain optimum hydrocarbon recovery. The critical evaluation of development strategies implemented to produce the greatest amount of hydrocarbons is described as follows:

The effect of vertical to horizontal permeability anisotropy was analyzed by producing the reservoir with kv/kh varied at 0.1, 0.2, 0.4, and 0.55. A horizontal well was drilled at a length of 3000 ft and the simulator was run for 10 years. The results of the oil production rate and cumulative oil production are shown in Figs. (9 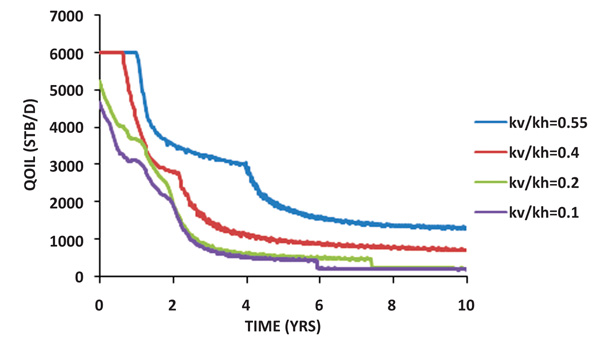 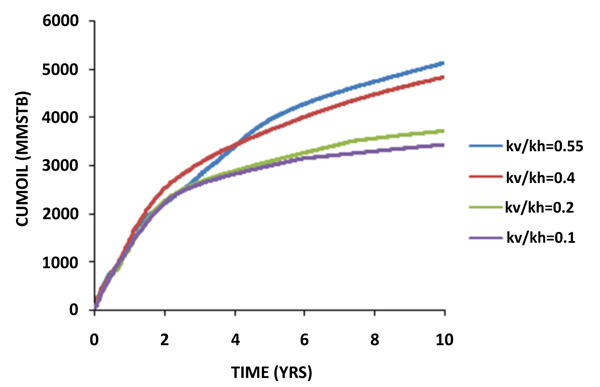 ), kv/kh ratio of 0.55 predicted a higher cumulative oil production as compared to kv/kh ratio of 0.4, 0.2, and 0.1 at the end of the 10 years. This is because a low vertical to horizontal permeability anisotropy ratio minimizes the vertical cross flow of hydrocarbon between the layers of the reservoir.

Already conducted and validated studies by various researchers [22R. Pathak, D.E. Ogbe, and J.L. Jensen, "The application of geostatistical and fluid flow simulation to evaluate options for well placement", Society of Petroleum Engineers, p. 4.] on the effect of permeability anisotropy on horizontal well performance is in agreement with the findings of this research in the sense that their work depicted the same trend with this research work as shown in Figs. (9

At kv/kh of 0.55, the effect of horizontal well length was analyzed by producing hydrocarbon from the reservoir with a varied length of 1500ft, 2000ft and 3000ft. Running the simulator for 10 years, the results of the oil production rate and cumulative oil production with respect to time are shown in Figs. (11 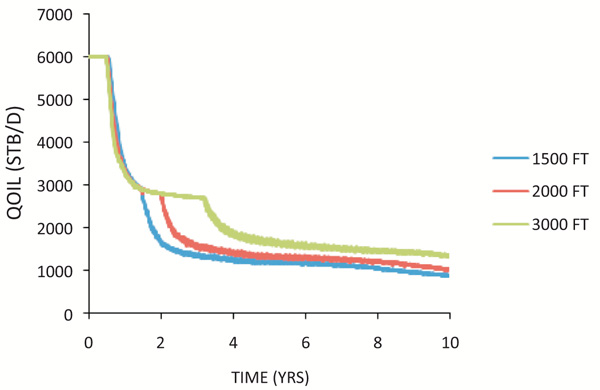 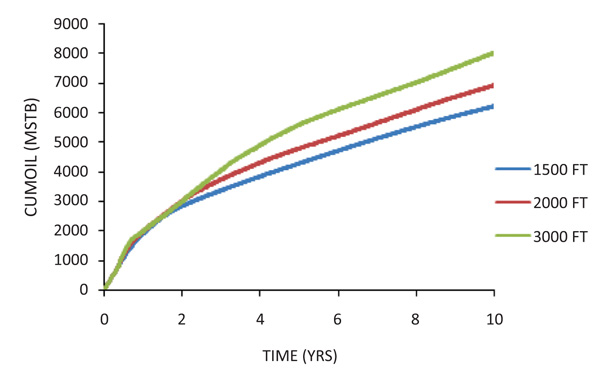 It was observed from the simulation studies conducted by Akpabio et al. [23J. U. Akpabio, O. I. Akpanika, and I. A. Isemin, "Horizontal well performance in thin oil rim reservoirs", Int. J. Eng. Sci. Res. tech., p. 4.] that increasing horizontal well length and production rate is desirable because it enhances ultimate recovery from the well bore. The findings of their research agree with this present study as depicted in Figs. (11 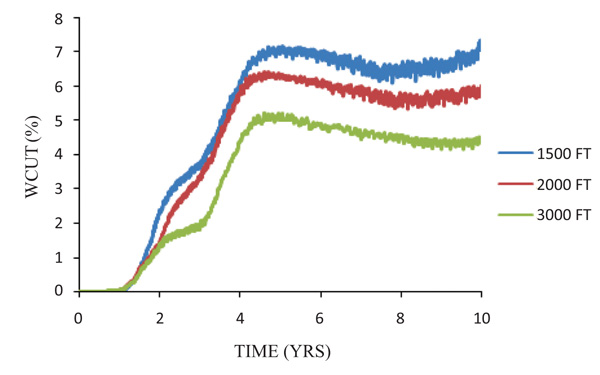 ) shows a graph of water cut versus time. Generally, the rate of water production from the reservoir was extremely low. This is because the analysis of the spatial distribution of petrophysical properties resulted in horizontal wells been drilled at best locations and perforated away from the water zone. 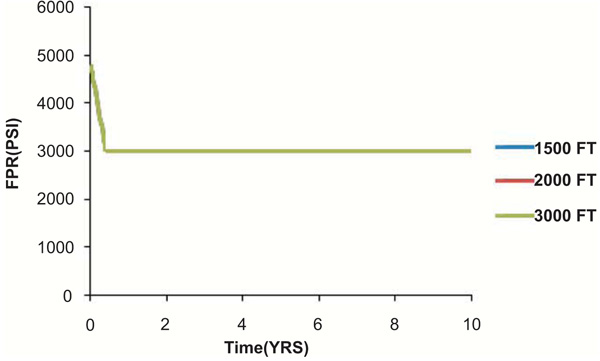 ) shows a graph of field pressure versus time. The graph shows no significant variation in the field pressure for the three wells. At 3009 psi, the field pressure remained constant till the end of the production period, year 10. This is due to the presence of a strong aquifer which provided enough pressure support.

The study seeks to evaluate the performance of fully penetrated horizontal wells based on the analysis of spatial distribution pattern of the reservoir petrophysical properties. Geostatistical models of permeability, porosity, and thickness were used to populate the reservoir model for dynamic simulation. Based on the above analysis, the following conclusions were derived:

Vertical to horizontal permeability anisotropy ratio affects horizontal wells. The performance of the horizontal wells appeared to be increasing steadily as kv/kh increases. At a kv/kh value of 0.55, a higher cumulative oil production was observed compared to a kv/kh ratio of 0.4, 0.2, and 0.1.

The data supporting the findings of the article is available in the [AAPG Datapages/Archives] at [http://archives. datapages.com/data/rmag/oilgasfields82/plumbushcreek.htm].

The authors appreciate the All Nations University College (ANUC), Koforidua for the supports granted to complete this work.